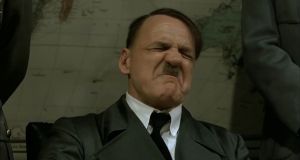 A technician on a BP refinery in Western Australia, was sacked after he used an oft-parodied scene from the 2004 film Downfall by Oliver Hirschbiegel about the final days of Hitler and Nazi Germany to depict his bosses during a tense wage negotiation.

An oil refinery worker who was sacked for creating an Adolf Hitler parody of his bosses has been awarded AU$200,000 in compensation.

The employee, a technician on a BP refinery in Western Australia, was sacked after he used an oft-parodied scene from the 2004 film Downfall by Oliver Hirschbiegel about the final days of Hitler and Nazi Germany to depict his bosses during a tense wage negotiation.

The man took BP to the Fair Work Commission (FWC) for unfair dismissal. He lost the case in September last year, after deputy president Melanie Binet sided with BP in finding the video was “inappropriate and offensive”.

But that decision was later overturned on appeal after the full bench of the commission ruled the “memetic context” of the video meant it was unreasonable to find the man was comparing his bosses to Nazis.

In February the FWC ordered the man be reinstated to his job at the Kwinana oil refinery in south-west Perth. Now, almost a year after the original decision, BP has been ordered to pay the man AU$200,000 for lost wages.

The company said he should have been paid less - about AU$150,000 - because sharing the video still amounted to misconduct. It also argued the man could have found other work during the long-running case.

But the FWC disagreed, ordering BP to pay him about AU$200,000 in lost salary, bonuses and superannuation.

The scene used in the video shows Hitler huddled inside his bunker with his top generals and is a powerful fictionalisation of the moment the Nazi leader realised the war was lost.

After the film’s release, it became a cultural touchstone of the internet age. On YouTube, hundreds of ‘Hitler rants’ parodied everything from the iPad to the break-up of Oasis and Sarah Palin’s resignation as the governor of Alaska.

BP had argued the video “attributes to Hitler’s character” comments the refinery manager had made during the wage negotiations and Ms Binet had sided with the company, saying she did not accept that “labelling something as a parody is a ‘get-out-of-jail-free card’ and necessarily means something is not offensive”.

But after his appeal victory in February, the Australian Workers’ Union claimed it as a victory for “workers rights in the digital era” and “Aussie larrikinism”. - Guardian