Peter Goff reports from Kashgar, Xinjiang: ‘All the students have graduated ... our work is done here,’ says principal at Uighur ‘re-education camp’ 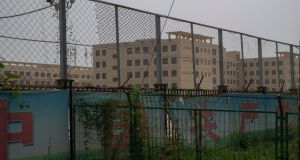 At least two major re-education camps in Kashgar in the Xinjiang region have been shut down in recent weeks, The Irish Times can confirm, but observers say while the government strategies in the region are changing, hundreds of thousands of members of ethnic minorities are still being held against their will in some form.

In the face of increasing international condemnation, the Xinjiang government announced last week the camps would be closing as “all the students had graduated”.

Last month, the China Cables – leaked Chinese Communist Party documents given to the International Consortium of Investigative Journalists and shared with The Irish Times – helped detail how the prison-like, extrajudicial facilities were part of a mass campaign of oppression against ethno-religious minorities.

Over the weekend, The Irish Times visited two shuttered Kashgar camps that until very recently had housed hundreds, if not thousands, of detainees.

At the Kashgar City Vocational Skills Training Centre, the high fences and watch towers remained, but the large iron gates were wide open, the security and armed police detail had disappeared, and the expansive campus was desolate.

Everything had been ripped out, leaving virtually nothing behind in the camp but empty, concrete rooms

“All the students have graduated. They are all finished now. Our work is done here,” said principal Mijiti Maihemoti, who ran the camp for two years.

After initially denying the re-education camps existed, in the face of mounting evidence Beijing admitted last year it had established “vocational training centres” across the province to help deradicalise minorities and counter extremism, as well as to teach the detainees Mandarin, the national laws and vocational skills.

“They have all been deradicalised and completed their studies. Nobody in this area is in further need of the training,” Mr Maihemoti said as he walked through the buildings that had all been stripped bare.

All the signage, chairs, desks, tables, whiteboards, bunk beds, office and kitchen equipment, surveillance cameras – everything had been ripped out, leaving virtually nothing behind in the camp but empty, concrete rooms.

The principal said more than 1,000 students had been through the facility over the past two years. His 70 teachers and the remaining students had all left at the end of November, he said.

The government would still offer vocational training in some centres, “but only if they are willing to come. They will not be forced to come,” he said.

While the stated policy was that people attended the camps voluntarily, at a local level officials more often depicted them as detention centres for minor offenders or people of concern who might otherwise face the harsh and opaque prison system.

Human rights groups and academics said there have been indications in recent months that the government was starting to wind down the camp system, while at the same time ramping up other forms of oppression. Dr Darren Byler, a specialist in Uighur and other minority issues in Xinjiang, said he felt the recent media reports had put pressure on the government to say they were dismantling the camps.

“My sense is that the leaks have prompted these statements from the government as well as intensifications of other forms of denial and misinformation,” he said.

If there have been mass graduations across the province, it will not have resulted in a substantial change for most people who were in the camps, said Dr Byler, a lecturer at the University of Washington.

“They are still being held against their will, as before,” he said. “Those who are transferred to factories are also still under strong forms of coercion based on all verifiable evidence I have seen. Many others have been transferred to prisons.”

Government reports indicate that, in addition to those detained in the camps, hundreds of thousands have been sent to prison in Xinjiang over the past three years, with the conviction rate in parts of the province up to 20 times the national average.

The documents show the long-term provincial strategy is to place most of the Muslim minority population in selected factory jobs, where surveillance and indoctrination can continue. Refusing government-assigned jobs without sufficient reason is one of the 75 signs of extremism listed by officials, and “there must not be any resistance”.

One Uighur who now lives outside China said he was not heartened by the reports the camps were closing as many people were still missing from his village.

“If they have graduated and it is over now, then where are all the missing people? We should hear from them. So many people I know are still missing family and friends,” he said. “We don’t know if they are in camps or factories or where.”

Outside of Kashgar, the Shule County Vocational Training Centre was also empty when The Irish Times visited on Saturday. On a previous visit in July, there were hundreds in the facility and the director Mamat Eli had said he expected some of them to stay for at least two or three years.

Many were “infected with radical thoughts”, he said then, and it could take years to treat and train them.

Anything up to 1.8 million Uighurs and other ethnic minorities could have been sent to the camps over the past three years

Now it stands in silence. The Chinese flag in the courtyard has been taken down along with the centre’s name and the propaganda signs. The buildings – some of which were only completed in the past year or so – were all under lock and key. In the icy cold, an elderly woman swept leaves on the cement expanse where until recently hundreds performed daily, choreographed exercise drills.

A county official denied there was an abrupt change in policy with the decision to close the camps.

“They all graduated, I think. There is no need for them anymore,” Mr Li, a Shule official, said. “But the government might reopen some later and people can come voluntarily if ordinary people want to learn some skills in future.”

The government has never said how many camps were opened, or how many people have been put through them, only saying the situation was “dynamic and fluid”. Some estimates have suggested there could be 1,000 or more of the facilities scattered across the massive 1.2 million sq/km province, which borders eight countries.

German researcher Adrian Zenz estimates anything up to 1.8 million Uighurs and other ethnic minorities could have been sent to the camps over the past three years.

A Kashgar government spokeswoman said: “I have no idea how many vocational and training centres there were in the Kashgar region, but I know they have recently all been closed. They are all closed right now. I can tell you that for sure . . . It is the same for the whole province [of Xinjang], I think.”

There is currently no independent verification of the government’s claims.

During the visit to the region, government officials produced several former detainees from the local camps who, under official watch, all told The Irish Times strikingly similar stories. They had been infected with radical extremist thoughts, they all said; they were rehabilitated in the camps; they now were out and had jobs thanks to the government; and their lives were all much improved so they were eternally grateful to the party.

“I was slowly educated. So was everyone else. There is no problem now,” said one 32-year-old waiter. “We have all graduated. We are free.”