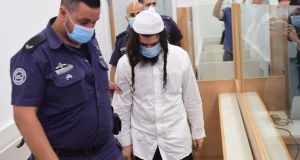 Amiram Ben-Uliel: was convicted in the city of Lod, Israel of the racially motivated murder of 18-month-old Ali Dawabsheh and his parents, Saad and Riham in a firebomb attack on their home in July 2015. Photograph: Avshalom Sassoni/EPA

A Jewish settler was found guilty by an Israeli court on Monday of racially motivated murder in a 2015 arson attack that killed a Palestinian couple and their baby in the occupied West Bank.

The deaths of 18-month-old Ali Dawabsheh and his parents, Saad and Riham, contributed to a surge of Israeli-Palestinian violence after US-sponsored peace talks stalled in 2014.

The ensuing investigation and prosecution of Amiram Ben-Uliel also laid bare fissures within Israeli society, with some ultra-nationalists challenging the state’s handling of Jewish suspects.

Israel’s Shin Bet counter-terrorism agency hailed the verdict handed down by Lod District Court, which carries a potential life prison term, as a “landmark”. Ben-Uliel (25) plans a supreme court appeal. His lawyer said Shin Bet interrogators had extracted a false confessions from him.

Israeli prosecutors said Ben-Uliel firebombed the Dawabsheh family home and another dwelling in Duma village after spray-painting “Revenge” and “Long Live King Messiah” on their walls. He was acquitted of a charge of belonging to a terrorist organisation.

Clutching a Jewish holy book, Ben-Uliel sat slumped in the dock as the verdict was read out. Israeli media quoted his wife, Orianne, as saying he was with her on the night of the Duma attack and was innocent.

“It was pretty clear Amiram would be convicted for acts he confessed to but did not commit,” defence lawyer Itzhak Bam told reporters, describing conditions under which the Shin Bet had interrogated Ben-Uliel as “a serious violation of his rights”.

The Shin Bet issued a statement that defended its methods as lawful and hailed the verdict as “an important landmark in the struggle against Jewish terrorism”.

Still, Palestinians see Israel as sluggish in cracking down on Jewish militants, compared with the speedy and sometimes lethal response by security forces to similar actions by Arabs.

Israeli officials said investigations into the Duma arson and other attacks by Jews opposed to any compromises with the Palestinians over territory were hampered by the suspects’ operating in tight-knit cells and eluding electronic surveillance.

A second, underage defendant in the case entered a plea deal last year in which he was convicted as an accessory. The Dawabshehs young son, Ahmed, survived but suffered burns and has been nursed by his grandfather, Hussein.

“I spent a whole year in the hospital. I don’t want any other family to experience this trauma. Enough already,” Hussein Dawabsheh told reporters. – Reuters