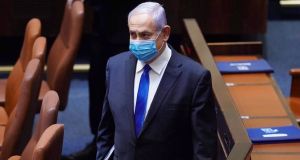 Binyamin Netanyahu has been sworn in as Israel’s prime minister, heading a unity government in which he will rotate the leadership with his former rival, Benny Gantz, in a deal that could see the annexation of large parts of the West Bank.

The coalition agreement ends a deadlock that has dragged on for more than 500 days. In that time the country has held three back-to-back elections, with neither side clinching an outright victory.

The Netanyahu-Gantz deal also hints at the potential annexation of parts of the Palestinian territories this summer, stating that Mr Netanyahu could bring Donald Trump’s “vision for peace” to the cabinet for discussion from July 1st.

The US plan, pre-emptively rejected by Palestinian leaders, gives Israel full military control over Palestinians, much of their land and all of Jerusalem and Israeli settlements.

Palestinians are provided with the option of economic incentives, land swaps and the prospect of some form of self-rule, but with significant caveats.

Speaking at the Knesset on Sunday ahead of being sworn in, Mr Netanyahu said he would extend Israeli sovereignty over settlements in the occupied West Bank, calling it “another glorious chapter in the history of Zionism”.

Originally scheduled for Thursday evening, the ceremony was postponed hours before it was due to take place after Mr Netanyahu asked for extra time to allocate ministerial portfolios to his Likud party, who were squabbling for cabinet positions.

To accommodate a broad coalition of divergent parties, the unity deal envisions a huge 36-minister cabinet.

Mr Netanyahu, currently the interim leader, will remain in the role for 18 months before handing over to Mr Gantz, a former army chief, for the remainder of a three-year term. Before taking the higher office Mr Gantz will be defence minister.

Facing the coronavirus pandemic, the two leaders agreed to form what they called an “emergency government” to steer the country through the crisis and its devastating economic fallout.

In his address to the Knesset on Sunday, Mr Gantz announced that “the biggest political crisis in Israel’s history” was over.

However, in the process of forming the coalition Mr Gantz saw his Blue and White party split apart, with resentment that its figurehead, who entered politics two years ago primarily on the promise to oust Mr Netanyahu, had agreed to prop him up instead.

Mr Gantz’s former running mate, now the head of the opposition, Yair Lapid, said the new government was the “largest, most bloated, most wasteful” in Israeli history.

The unity deal was largely seen as a career-saver for Mr Netanyahu. Israel’s longest-serving leader is a deeply divisive figure in Israel, and faces three damning criminal corruption cases, with hearings scheduled to begin later this month.

Under the coalition agreement Mr Netanyahu will have extra legal protections, meaning he will not have to resign as a public official despite the charges against him, which he denies.

Allies in his Likud party retain significant power. Yariv Levin, one of Mr Netanyahu’s closest supporters, will be the new parliament speaker.

Gideon Saar, who failed to replace Mr Netanyahu in December as Likud leader, was not given a ministerial post. – Guardian