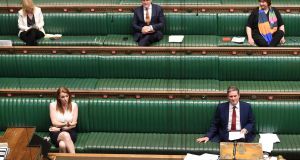 Boris Johnson has promised to introduce a “world-beating” coronavirus track-and-trace system by June 1st, although Downing Street suggested that the launch of a contact tracing app faced further delays.

The prime minister said 24,000 people had already been hired to conduct contact tracing, which Britain abandoned 10 weeks ago in the early stages of the epidemic. “We have growing confidence that we will have a test, track and trace operation that will be world-beating and, yes, it will be in place by June 1st.”

Mr Johnson was speaking during prime minister’s questions after Labour leader Keir Starmer described the government’s failure to conduct testing and tracing during recent weeks as “a huge hole in our defences” against coronavirus.

Sir Keir also criticised the government for its failure to exempt non-British health service and care-home workers from having to pay a surcharge of hundreds of pounds to use the NHS.

“I have thought a great deal about this, and I accept and understand the difficulties faced by our amazing NHS staff,” the prime minister said.

“I have been a personal beneficiary of carers who have come from abroad and frankly saved my life. I know exactly the importance of what he asks.

“On the other hand we must look at the realities. This is a great national service – it is a national institution – that needs funding, and those contributions help us to raise about £900 million. It is very difficult in the current circumstances to find alternative sources, so with great respect for the right hon and learned gentleman’s point, I think it is the right way forward.”

Commons leader Jacob Rees-Mogg told MPs that arrangements that allowed them to participate and vote without being in Westminster would come to an end after the Whitsun recess on June 2nd. He said MPs would practise social distancing and continue to limit the number present in the chamber at any time.

“Is this in line with government advice? Yes, of course it is. The key question for right honourable members to ask themselves is: do they think that proper scrutiny and proper legislative processes are essential? If they are, we need to be here. If they are not, they can work remotely.

“It seems to me, unquestionably, that those proper processes are an essential part of our country functioning. Therefore, we cannot do our jobs properly from home, and therefore that is in line with the Government’s advice.”

Gavin Robinson, DUP MP for Belfast East, said it was difficult to commute to Westminster from Northern Ireland or to exercise social distancing on an aircraft.

“I ask the leader of the house to consider the issue that will be most vexatious and difficult to solve, which is voting.

“I ask him whether remote voting can continue given that the ability to travel between Westminster and Northern Ireland is severely constrained, with less than two planes per day from Northern Ireland to London when ordinarily there would have been more than 20.”