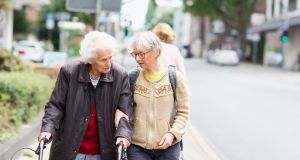 The granny in the song buys and fries cheap chops because meat from discount supermarkets ‘costs nothing’. She doesn’t fly but goes on several cruises a year. She drives an SUV and, on the way to the doctor, knocks over pensioners with walking frames. Photograph: iStock

Germany’s largest public broadcaster will hold a crisis meeting on Tuesday to discuss growing outrage around a song mocking the less-than-green lifestyle habits of pensioners.

The satirical song, Granny is an Environmental Swine, is a rewritten version of an old children’s favourite – and was sung on WDR television by a beaming children’s choir, delighted at the naughty new verses.

This granny buys and fries cheap chops because meat from discount supermarkets “costs nothing”. She doesn’t fly but goes on several cruises a year. She drives an SUV and, on the way to the doctor, knocks over pensioners with walking frames.

The song ends with Greta Thunberg’s UN climate change speech: “We will not let you get away with this.”

After the broadcast, WDR says it was flooded complaints by older viewers, complaining of blanket defamation of a population group.

“That’s exactly what is happening here, at least that is how many older people perceived it,” said Tom Buhrow, director general of WDR, who apologised for the clip – which has been pulled from from WDR’s online player.

Days after the broadcast, there is no sign that the fuss over the song is passing. Instead fear is growing among employees of Cologne-based WDR that, unwittingly, Mr Buhrow’s hasty apology has left the broadcaster more vulnerable in the future.

“With his reaction to an artificially-created scandal, Tom Buhrow has walked into a trap he won’t escape without huge loss of credibility,” the letter added.

Instead, they saw in the song a chance to attack WDR – part of a vast, decentral public broadcaster in Germany. These broadcasters are funded by a household-based licence fee that raises about €8 billion annually – and is a pet hate that Germany’s far right is campaigning to have abolished.

“Now they’ve learned that, through external pressure, WDR can be made to apologise at the highest level, through the director general,” said Erik Flügge, communications adviser, on German television.

Caricaturist Burkhard Mohr defended the satirical song and suggested that, if such swipes are not permissible, that Germany might be better off banning all forms of satire.

“These days there are simply too many insulted, wounded, outraged people,” he said. “But what happens to our freedom of expression if we have to orient ourselves around the outraged people?”