Trump says Iranian commander ‘should have been taken out’ years ago 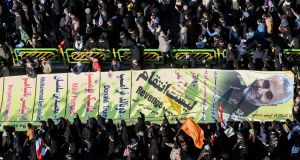 A banner bearing the likeness of Qassem Suleimani is carried during a funeral procession in Tehran, Iran. Photograph: Arash Khamooshi/The New York Times

US president Donald Trump has defended his decision to order the killing of a top Iranian commander, claiming that Qassem Suleimani “should have been taken out” years ago.

Speaking to right-wing radio host Rush Limbaugh on his first full day back in Washington after returning from Florida where he spent the Christmas break, Mr Trump said that presidents George W Bush and Barack Obama should have targeted Suleimani.

“We’ll see what the response is, if any,” he said, when asked about fears of Iranian retaliation.

Huge throngs of Iranians gathered in Iran on Monday to mourn the death of Suleimani, one of the best-known figures in the country, who was targeted in a US drone strike in Iraq on Friday which caused shockwaves throughout the region.

Thousands of US troops have begun making their way to the Middle East – many of whom are expected to travel through Shannon Airport – and the Pentagon was said to be preparing to dispatch sailors and marines to reinforce the US military presence there.

Mr Trump warned Iran over the weekend that the US had identified 52 targets it could hit in the country, including Iranian cultural sites – a threat that has left the US president open to accusations that he could be guilty of international war crimes if he follows through.

Both Mr Trump and secretary of state Mike Pompeo have said that Friday’s drone strike, which also killed a leading Iraqi militia commander, was a defensive action, taken in response to an “imminent threat” against Americans.

But Democrats have demanded answers about the information that led to Mr Trump taking the decision, which dramatically escalated tensions with Iran.

The House of Representatives, which will reconvene after the Christmas recess on Tuesday, is expected this week to vote on a resolution limiting Mr Trump’ s military actions in Iran.

House speaker Nancy Pelosi wrote to her members on Sunday stating that the resolution would mandate that the administration’s activities with regards to Iran would cease within 30 days if it does not get congressional approval. Describing the killing of Suleimani as a “provocative and disproportionate military air strike”, she wrote: “As members of Congress, our first responsibility is to keep the American people safe. For this reason, we are concerned that the administration took this action without the consultation of Congress and without respect for Congress’s war powers granted to it by the constitution.”

The Suleimani killing has raised new questions about the executive branch’s authority over foreign policy matters. The White House informed Congress of the decision within 48 hours, as required under the 1973 War Powers Act – both through a presidential tweet and an official notification delivered to Congress over the weekend. But Democrats are worried that Mr Trump may further involve the US in a war in the Middle East.

UN secretary general António Guterres urged all sides to exercise restraint following the US strike. “I have been following the recent rise in global tensions with great concern,” Mr Guterres said at the UN. “My message is simple and clear: stop escalation, exercise maximum restraint, restart dialogue.”

Nato’s secretary general Jens Stoltenberg also said that it was important to “de-escalate and avoid further increases in tensions on the region”. He was speaking after Nato diplomats were briefed by US state department and Pentagon officials on the strike.

“We are united in condemning Iran’s support of a variety of different terrorist groups,” he said. “ A new conflict would be in no one’s interest. So Iran must refrain from further violence and provocations.”