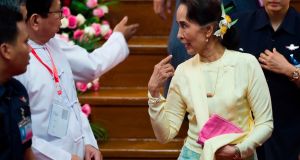 The world was waiting for her to speak. But the day after a damning United Nations report concluded that genocide had occurred in Myanmar under her watch, Aung San Suu Kyi used a public appearance to discuss only poetry and literature.

Arriving at the University of Yangon 24 hours after the publication of the UN fact-finding mission’s report, which concluded that the Myanmar military had carried out a genocide of the Rohingya Muslim minority in Rakhine and were responsible for war crimes and crimes against humanity in the Rakhine, Shan and Kachin states, the Myanmar leader chose to stay silent on all issues of politics and made no mention of the UN.

The former Nobel Peace Prize winner, who was once heralded as the face of a new democratic Myanmar, but whose government is now facing mounting calls to be investigated by the International Criminal Court (ICC) for war crimes, spent the afternoon talking to students about the merits of Gone With the Wind, and the differences between fiction and non-fiction.

The crimes uncovered in the UN report were carried out by the Myanmar military, over whom Suu Kyi, as de facto leader of the civilian government, has no control. However, the panel criticised her for her refusal to condemn the genocide of the Muslim Rohingya in Rakhine since August 2017, which has led to tens of thousands of deaths and forced 700,000 to flee over the border to Bangladesh.

The report said Suu Kyi had failed to use her “position as head of government, or her moral authority, to stem or prevent the unfolding events in Rakhine state”.

Overall, the Myanmar government and military’s response to the UN report was defined by a resounding silence, with no mention of the mission’s findings in the government-controlled newspaper, the Global New Light of Myanmar.

Myanmar’s military – which was found to have carried out “the gravest crimes under international law” including genocide, imprisonments, enforced disappearances, torture, rapes and sexual slavery – was outraged, however, that 18 Facebook accounts and 52 Facebook pages with which it was associated, including that of the commander-in-chief, Min Aung Hlaing, were removed by the social media company minutes after the report was published.

Facebook said in a statement it had removed the accounts “to prevent them from using our service to further inflame ethnic and religious tensions”. The military-backed Union Solidarity and Development party (USDP) spokesperson Thein Tun Oo denied that the pages had been used to spread hate speech.

“The Facebook page of the senior general Min Aung Hlaing is publicising true and confirmed information for the public, the Tatmadaw [Myanmar military] is essential for our country,” he told the Guardian.

Thein Tun Oo had told local media on Monday that to “say the whole Tatmadaw is making hate speech is a one-sided accusation”.

Facebook, which has come under fire for its failure to respond quickly to the spread of anti-Rohingya hate speech in Myanmar, said an investigation into the Tatmadaw accounts had found evidence they were using supposedly independent accounts to “to covertly push the messages of the Myanmar military”.

Thein Tun Oo called on Facebook to reinstate the pages, which had a total of 12 million followers, describing the Tatmadaw as “an organisation which gives information to the public”. A government spokesperson, Zaw Htay, told reporters he was in talks to get the accounts reinstated. – Guardian