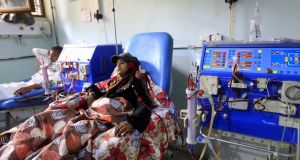 Air strikes by the Saudi-led coalition in the war in Yemen have caused heavy civilian casualties and some may amount to war crimes, UN human rights experts said on Tuesday.

The experts’ panel also said that fighters of the rebel Houthi movement had fired missiles into Saudi Arabia and shelled the Yemeni city of Taiz. It accused them of committing torture and deploying child soldiers, which are both war crimes.

Saudi Arabia is leading a western-backed alliance of Sunni Muslim Arab states trying to restore the internationally recognised government of Yemeni president Abd-Rabbu Mansour Hadi, who was ousted from the capital Sanaa by the Iran-aligned Houthis in 2015.

The experts said they did not examine the United States and Britain, who supply weapons and intelligence to the alliance, or Iranian support for the Houthis but other UN bodies were doing so. They urged all states to restrict arms sales to help end the war.

“I think it fair to say, that of those parties that we have investigated – and we have not been able to look at for example al-Qaeda and Daesh [Islamic State] who are also involved in Yemen – of those parties, none have clean hands,” panel member Charles Garraway told a news conference.

The report to the UN Human Rights Council was the first United Nations investigation into possible war crimes in Yemen although international human rights groups have regularly documented abuses. It was released ahead of UN peace talks between Mr Hadi’s government and Houthis scheduled for September 6th in Geneva.

More than 10,000 people have been killed in the war in Yemen and 8.4 million are on the brink of famine, the panel said.

United Arab Emirates (UAE) personnel and proxy forces which are part of the coalition have raped detainees and migrants, they said.

The Saudi-led coalition said it had referred the UN report to its legal team for review. “The coalition will take an appropriate position on this matter and make an announcement about it once the legal team submits its observations,” it said in a statement.

UAE minister of state for foreign affairs Anwar Gargash, said the report merited a response. But he added the region needed to be preserved from “Iranian encroachment”.

Houthi officials could not immediately be reached for comment.

The panel said its investigation of 11 incidents raised serious concerns about the coalition’s targeting process.

Attacks that fail to spare people or structures protected by international humanitarian law would be unlawful violations, it said. But its investigation showed that field commanders “routinely failed to consult with those in the [coalition] Joint Command holding information about the No-Strike Lists”.

Mr Garraway said that despite requests, the panel had not been given full access to the coalition’s targeting process, making it extremely difficult to reach firm conclusions.

“But what we have seen from the ground indicates that there may be systemic problems in that targeting process,” he said.

The experts, who made about a dozen visits to Yemen, said that they had compiled a confidential list of suspects.

“It would seem that the strikes came from the south, where the Emirati forces and forces of President Hadi are concentrated, near the airport,” Mr Jendoubi said.

Mr Garraway told Reuters: “It does fit the pattern...If hospitals are being struck, one asks if the commanders giving orders for shelling have actually got sight of the No-Strike List.” – Reuters