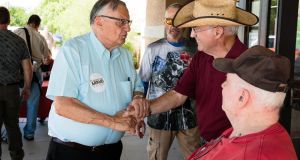 Donald Trump finally succumbed to pressure and ordered flags to be flown at half-mast in honour of John McCain on Monday. While the U-turn was ostensibly prompted by widespread public outrage at the president’s reluctance to honour the Vietnam veteran, private pressures may also have swayed the president.

There were reports that Melania Trump, along with press secretary Sarah Sanders and the president’s daughter, Ivanka, were among those who urged Trump to reconsider. Speculation has also mounted that the first lady may attend the funeral on Saturday in Washington National Cathedral, following her attendance at Barbara Bush’s funeral earlier this year, which was widely lauded.

McCain’s passing also has wider implications for national and state-wide politics: it has opened up a seat in the US Senate

Much attention in the days following McCain’s death has been on the unseemly spat between the current president and his one-time foe. The contrast between the petulant, small-minded response of the president to McCain’s death and the bipartisan heroism epitomised by the Arizona senator has never seemed so clear.

But McCain’s passing also has wider implications for national and state-wide politics: it has opened up a seat in the US Senate where Republicans hold a slim majority of 51 to 49. Had McCain, who had been battling cancer since last year, died before May 30th, his vacant seat would have been on the ballot in November’s midterm elections.

Instead, Arizona’s governor Doug Ducey must now appoint a replacement who will hold McCain’s seat until 2020. This avoids the scenario of Arizona’s two Senate seats being up for grabs this November. Junior senator Jeff Flake had already announced his intention to retire, prompting a Republican primary for the seat.

In a quirk of timing, on Tuesday Arizona Republicans went to the polls in the primary contest to replace Flake. Three names were on the ballot – Martha McSally, a former air force pilot and two-term congresswoman seen as the establishment choice; Kelli Ward, an Arizona doctor and Trump acolyte who has taken a hard stance on immigration; and Joe Arpaio, the controversial former sheriff who was pardoned by Trump last year after he was convicted of criminal contempt.

While the country continues to mourn the passing of McCain, the legacy of the six-term Arizona senator in his own state is more complex. Significantly, none of the candidates aligned themselves with McCain, instead stressing their pro-Trump credentials.

This is particularly the case with Arpaio and Ward – both staunch Trump supporters during the 2016 election campaign – though Ward was widely lambasted for suggesting last Friday that the McCain family’s announcement that the senator was discontinuing his cancer treatment was designed to hurt her campaign.

Even McSally, who previously criticised Trump, has moved to embrace the president in the run-up to her own primary contest. Under pressure from the right from her primary opponents, she was quick to stress that she has voted with the president 95 per cent of the time in Congress.

In this sense, the Arizona primary race epitomises a trend throughout the country: Republican candidates are highlighting their support for Trump. Apart from last week’s governor race in Wyoming where the candidate backed by Trump lost, most pro-Trump primary candidates have been rewarded, an indication of the president’s popularity among Republicans.

This shift to the right may spell trouble for candidates, however, once the general election comes around in November. Whoever is declared the winner of Tuesday’s primary in Arizona is likely to face Democratic candidate Kyrsten Sinema.

Although Arizona has long had a history of electing Republican senators – McCain himself filled the seat held by Republican giant Barry Goldwater – shifting demographics have piqued hopes among Democrats that Arizona is becoming a blue state. Trump did win Arizona in 2016, but by a small margin of four percentage points. Moderate Republicans and independents are unlikely to warm to a Republican candidate who has aligned themselves with Trump.

As for McCain’s replacement, governor Duce – who himself faced a primary challenge on Tuesday night for the governor’s mansion – has said he will not make a decision until after the late senator’s funeral. Among the possible candidates is McCain’s wife, Cindy. Other possibilities include former senator Jon Kyl and the governor’s own chief of staff, Kirk Adams.

In many ways, Arizona encapsulates the existential challenges facing the Republican party in the era of Trump. The state’s two senators, Flake and McCain, were strong critics of the president, but it remains to be seen if their replacements will continue to be thorns in his side, or instead be more in the Trump mould.

In the immediate term, however, McCain’s departure from the Senate may take some of the heat off Trump. McCain’s replacement as head of the Armed Services Committee, Jim Inhofe, is more supportive of Trump. Similarly, whoever replaces McCain – even if critical of Trump – is unlikely to have the bite and gravitas of the late senator.

The reality is that as the midterm elections approach, the US Senate is losing its most vocal Republican critics of Trump – McCain, Flake and Tennessee senator Bob Corker, who is also retiring. Whoever emerges in their place will help to define the politics of the Republican party in the coming years.