Sydney Letter: Public tired of PMs changing via party processes, rather than by voters 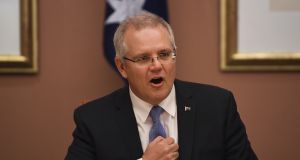 If the main reason for changing your party’s leader is to make the party more popular, last week’s ritual bloodletting in Australia was an epic fail.

Fortuitously, or otherwise, a political poll was being conducted just as Scott Morrison replaced Malcolm Turnbull as Liberal Party leader and prime minister. The Newspoll result saw a 10-point turnaround in a fortnight, from the opposition Labor Party barely leading the Liberal-National coalition 51 to 49 after preferences, to a 56-44 lead for Labor.

The coalition’s primary vote fell to 35, while Labor’s went up to 39. And Morrison’s polling as preferred prime minister was 33 (down from Turnbull’s 44 two weeks earlier), while Labor leader Bill Shorten was up seven to 39.

Machiavelli was concerned with Italy in the Renaissance, but he may as well have been predicting Australia as it is today

The public has made it clear it has had enough of prime ministers being changed through internal Liberal or Labor processes, rather than by Australian voters. It has happened in each of the last four federal parliament terms – two Labor governments followed by two Liberal. No Australian prime minister has served a full term since John Howard, who left the office in 2007.

And despite former prime minister Tony Abbott (who was deposed by Turnbull in 2015 and played a major role in getting revenge last week) saying “the era of the political assassin” is over, there is zero evidence this is the case.

Turnbull is quitting parliament on Friday, which will trigger a byelection in his Sydney seat of Wentworth, which centres on the internationally known Bondi Beach area. With the government having a one-seat majority in the lower house of parliament, it could be just weeks away from being a minority.

When Niccolò Machiavelli was writing about the kind of duplicitous political acts that came to be known as Machiavellian, he was concerned with Italy in the Renaissance, but he may as well have been predicting Australia as it is today.

A locally popular small “L” liberal prime minister has been knifed in the back by the dominant right flank of his big “L” Liberal Party. Turnbull’s son-in-law James Brown, who was considered a strong possibility to replace him, now says he is not interested, but Abbott’s sister Christine Forster says she wants the spot.

Though Machiavelli is the more obvious literary figure to explain Australian politics, WB Yeats deserves a look-in too

Turnbull’s son, Alex, further muddied the waters by saying after what happened to his father: “It’s impossible to vote for the Liberal Party in good conscience.” He said he now has no political ambitions himself. “My father fought the stupid and the stupid won.”

He also praised Tim Murray, Labor’s candidate for Wentworth. “He’s a great guy and I know him well,” he said. “[It’s] hard to back a Labor guy but not Tim.”

Not content with burning his bridges, Turnbull junior decided to salt the land too. He told the Sydney Morning Herald newspaper that coal companies “have their hooks into the Liberal Party . . . which has no money”.

Nothing in it for him

Given his multi-millionaire father gave $1.75 million (€1.1 million) of his own money to the Liberals during the 2016 election campaign and is unlikely to feel so generous when there’s nothing in it for him, the second half of that sentence will hurt the Liberals more than the first.

If what Alex Turnbull says about the coal companies is true (and given Morrison’s chief of staff John Kunkel is the former deputy chief executive of the Minerals Council of Australia, and Morrison once brought a lump of coal into parliament to taunt Labor, it may well be), it is the environment, and therefore the Australian people, that will feel the pain.

Though Machiavelli is the more obvious literary figure to explain Australian politics, WB Yeats deserves a look-in too. When Kevin Rudd was deposed as Labor prime minister by Julia Gillard in 2010, Turnbull expressed sympathy by quoting Yeats’s The Second Coming.

Its lines about how “Things fall apart; the centre cannot hold”, and “The best lack all conviction, while the worst are full of passionate intensity” are as true today as they ever were.