At least 35 dead as minibus crashes into gorge in Kashmir

Officials investigating whether it was a mechanical failure or driver negligence 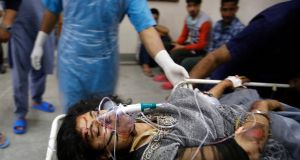 An overcrowded minibus has crashed into a gorge in Indian-controlled Kashmir, killing at least 35 people and injuring another 17.

The bus plunged off the Himalayan mountain road as its driver negotiated a bend and rolled down into a 150m (500ft) deep gorge along a rocky stream, said civil administrator Angrez Singh Rana.

He said officials are investigating whether it was a mechanical failure or driver negligence.

He said the 27-seat bus was overcrowded.

Rescue teams have evacuated all of the injured to hospital, where they are all in a critical condition.

On Thursday, a minibus carrying students to a picnic crashed into a gorge along another Himalayan road in Kashmir, killing at least 11 and injuring seven others.