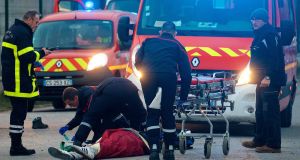 Injured in Calais: a migrant is helped after clashes near the city’s ferry port. Photograph: Johan Ben Azzouz/EPA

Twenty-two migrants were wounded and four of them were in a critical condition after the worst violence to date in the English Channel port city of Calais.

The fighting between Afghan and Eritrean migrants broke out on Thursday afternoon during a meal distribution by a charitable association. An Afghan among a group of about 100 reportedly opened fire on a group of 30 or so Eritreans, wounding five. Later in the day about 100 Eritreans armed with sticks and metal bars attacked 30 Afghans, near a different food-distribution point. Several clashes occurred around the city. About 150 CRS riot police patrolled through the night.

Traffickers charge migrants for access to parking lots where lorries bound for the UK wait for ferries. François Guennoc of the Auberge des Migrants volunteer group told the newspaper Libération that he had seen migrants beaten up when they tried to enter a parking lot without paying.

Police have received contradictory orders to treat migrants humanely but not to allow them to establish themselves in any particular location. According to Jean-Claude Lenoir, president of the Salam association, police dismantle all makeshift shelters every morning. The migrants flee when police arrive. Police then confiscate all belongings as abandoned.

The local authority says migrants may claim their belongings if they show identity papers. Vincent de Coninck of Secours Catholique, another organisation that seeks to help migrants, told Le Monde that more and more migrants “bury their personal effects, like animals, to avoid this situation”.

A police inspectors’ report last October said it was plausible that officers in Calais contravened police ethics and rules on the use of force.

When he visited Calais on January 16th, President Emmanuel Macron criticised associations that “encourage men and women to stay here, illegally, or even to cross the border illegally”.

Gérard Collomb, the interior minister, arrived in Calais on Thursday night. He echoed Mr Macron’s earlier criticism, as well as remarks by Natacha Bouchart, the mayor of Calais. “I call on the associations, in particular those who refused to meet the president of the republic in Calais, to reflect on what happened here tonight,” he said. Three charitable associations, l’Auberge des Migrants, Utopia 56 and Médecins du Monde, refused to meet Mr Macron.

Mr Collomb said the violence was exceptionally serious. “What the inhabitants of Calais are living through is unbearable. The strongest are now using firearms. We will take measures in coming weeks to ensure that it ceases.”

He promised to send another two companies of riot police to Calais. Security forces already outnumber migrants in Calais by nearly two to one. He also reiterated Mr Macron’s promise that the state, not the associations, would in future provide meals for migrants. “What has happened here shows yet again what we were saying: this type of gathering leads to serious disturbances of public order.”

The government wants the migrants to go to five “welcome centres” in the Pas-de-Calais region. But migrants who were fingerprinted in Greece or Italy fear they will be sent back there.

When Mr Macron visited Calais about 500 migrants were sleeping rough there. Paradoxically, his speech and subsequent meeting with the British prime minister, Theresa May, at Sandhurst military academy appear to have aggravated the local crisis. Attracted by talk of reunification with family members in Britain and French pressure on the UK to accept more unaccompanied minors, about 200 more migrants, including several dozen women and about 100 children, have flocked to Calais.