Half of Iranians reject compulsory veils – a pillar of revolution 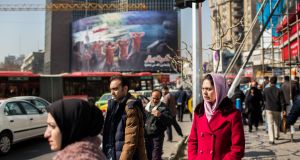 Pedestrians on the streets of Tehran last February. Twenty-nine people, most of them women, have been arrested in connection with recent protests in Iran against the compulsory Islamic veil for women. Photograph: Arash Khamooshi/The New York Times

The office of Iran’s president Sunday charged into the middle of one of the most contentious debates over the character of the Islamic Republic, suddenly releasing a three-year-old report showing that nearly half of Iranians wanted an end to the requirement that women cover their heads in public.

The report’s release comes as dozens of women in recent weeks have protested in public against being forced to wear the veil, a symbol of Iran’s revolution as much as it is deemed a religious requirement.

The decision to release the report – which found that 49.8 percent of Iranians, both women and men, consider the Islamic veil a private matter and think the government should have no say in it – appears to pit President Hassan Rouhani directly against Iran’s hard-line judiciary, which on Friday said that 29 people had been detained in connection with the protests.

They have called the demonstrations “childish”, insist that the large majority of Iranians support Islamic veiling and have called for harsher measures against those protesting the veil.

At least as striking as the report’s findings was the timing of its release. The study is from 2014, and publishing it now suggests that the president saw this as a moment to challenge the hard-liners, who hold ultimate power, about such a symbolically potent issue.

Observers said the release of the report, by one of Rouhani’s closest advisers, was probably a politically calculated decision by the president, an Islamic cleric, to bolster support for social reforms and to signal to the authorities to temper their response to the veil protests.

“The government wants to show that any crackdown against the veil is illegal and not democratic,” said Fazel Meybodi, a reformist cleric from the city of Qom. “Anyway, crackdowns and punishment are not a part of Islam.”

Rouhani, a moderate compared to Iran’s hard-liners, decades ago prided himself on having been the one responsible for introducing the law on the compulsory Islamic veil. But since his election as president in 2013, and continuing after his re-election last year, he has called for more freedoms for Iranians.

“Mr President wants to be popular, and his team knows that an increasing number of women do not like the Islamic code of dress,” said Farshad Ghorbanpour, a political analyst close to the government. “They want to woo the women and make sure the popularity of the president does not diminish even further.”

Rouhani’s adviser who released the report, Hesameddin Ashna, heads the Centre for Strategic Studies, a government research group that in 2014 conducted a nationwide survey of public opinion about the compulsory Islamic veil.

One of the women who protested on the street last week by taking off her scarf, and who requested anonymity out of fear of being arrested, said that the report was helpful, but that it did not go far enough. Women are demanding full freedom, the 28-year-old woman said, adding that the report showed that many people agreed with that view.

This past week, dozens of women made the same symbolic gesture and shared their actions on social media: taking off their headscarves in public and waving them on a stick. They were emulating a young woman who had climbed onto a utility box on December 27th, removed her scarf and was subsequently arrested. Activists say she has since been released, but she still has not resurfaced in public.

The protests, while small in number, are nevertheless significant as a rare public sign that dissatisfaction with certain Islamic laws governing personal conduct may have reached a tipping point in Iran. The first protest in December took place on a Wednesday and seemed connected to the White Wednesday campaign, an initiative by Masih Alinejad, an exiled Iranian journalist and activist living in the United States.

Alinejad has reached out to Iranian women on Persian-language satellite television, through social media and through a website she runs called My Stealthy Freedom. On the website, women post images of themselves without headscarves, demanding an end to the compulsory headscarf law.

The Islamic headscarf, or hijab, is seen by Iranian ideologues as a pillar of the Islamic Republic of Iran. The law regarding the scarf has been enforced since the 1979 Islamic Revolution, and a headscarf is obligatory for every woman in the country, even tourists and visiting foreign dignitaries.

Although women are subject to broader laws on matters like divorce and inheritance, the hijab is a highly public symbol of the rules imposed by Iran’s clerical leaders. Rules are also imposed on men, who are not allowed to wear shorts in public.

Many Iranians now resent such restrictions as the country has grown more secular, and are increasingly flouting them. Recent unrest in Iran has also erupted over economic concerns, which fuelled the anti-government protests that roiled the country late last year. The week-long demonstrations across Iran, centred in religiously conservative, working-class towns and cities rather than Tehran, were the broadest display of discontent since the Green Movement protests in 2009 after a disputed presidential election.

The outpouring of anger was directed not only at Rouhani, who won re-election promising to revitalise the economy, but also at the country’s supreme leader, Ayatollah Ali Khamenei. Nearly 5,000 protesters were detained and 25 were killed – some of them, families of the victims say, at the hands of their jailers. – New York Times