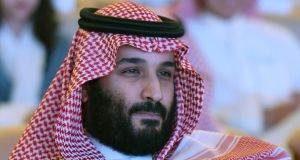 Saudi Arabia’s government has arranged to seize more than €85 billion in financial settlements with businessmen and officials detained in its crackdown on corruption, the attorney general said on Tuesday.

“The estimated value of settlements currently stands at more than 400 billion riyals” – €86 billion – “represented in various types of assets, including real estate, commercial entities, securities, cash and other assets,” Sheikh Saud al-Mojeb said in a statement.

The huge sum, if it is successfully recovered, would be a major financial boost for the government, which has seen its finances strained by low oil prices. The state budget deficit this year is projected at 195 billion riyals, or €42 billion.

The announcement also appeared to represent a political victory for Crown Prince Mohammed bin Salman, who launched the purge last November and predicted at the time that it would net about €80 billion in settlements.

Dozens of top officials and businessmen were detained in the purge, many of them confined and interrogated at Riyadh’s opulent Ritz-Carlton Hotel.

The investigation subpoenaed 381 people, some of whom testified or provided evidence, Sheikh Mojeb said, adding that 56 people – down from 95 early last week – had not reached settlements and were still in custody. Some cases are expected to go for trial, authorities have said previously.

More than 100 detainees are believed to have been released. Prince Alwaleed bin Talal, the billionaire owner of the global investor Kingdom Holding Company, and Waleed al-Ibrahim, who controls the influential regional broadcaster MBC, were freed last weekend. – Reuters