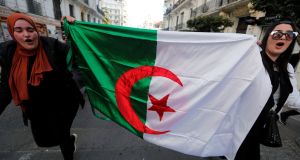 Students hold an Algerian flag as they take part in a protest in Algiers on Tuesday. Photograph: Zohra Bensemra/Reuters 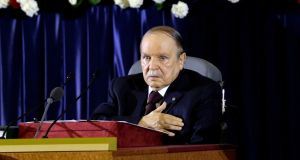 President Abdelaziz Bouteflika pictured during a swearing-in ceremony in Algiers after easily winning an election opponents dismissed as fraudulent in 2014. Photograph: Louafi Larbi/Reuters

As protests raged across Algeria against a fifth term for President Abdelaziz Bouteflika, the ailing leader was languishing in a Swiss hospital, the state of his health a closely held secret.

Bouteflika has not spoken publicly since 2013, when a stroke left him paralysed. On a rare public appearance last year, the 82-year-old president appeared a shrunken and hunched figure confined to a wheelchair.

His illness and near invisibility cut to the heart of the massive street protests that have rocked Algeria over the past two weeks, the biggest for more than three decades. The prospect of a further five years under an incapacitated president first elected in 1999 has infuriated Algerians, who regard his candidacy as an insult.

They believe that political power in the gas-rich North African country is being wielded by a shadowy clique of civilian and military figures around the president, including powerful businessmen and Bouteflika’s brother. The protesters view the Bouteflika candidacy as a cynical attempt by this coterie to keep hold of the levers of power.

“We do not know who is running the country,” said Moustapha Bouchachi, a prominent Algerian human rights lawyer. “Who is appointing governments, ambassadors and ministers? There are people making decisions in this country without official positions and without accountability.”

Influential individuals in the regime include Said Bouteflika, the president’s younger sibling who serves as his adviser and gatekeeper, and Ahmed Gaid Salah, the army chief of staff who recently warned the protesters that they were pushing the country of 40 million people to an unknown future.

Since gaining independence from France in 1962, decision-making in Algeria has traditionally reflected a balance between the interests of often competing clans within the ruling establishment, including the country’s powerful military.

But Hannah Armstrong, an analyst at the International Crisis Group think-tank, cautioned against what she described as a tendency by observers to “over-emphasise the role of the generals” in Algeria under Bouteflika.

“During the course of Bouteflika’s fourth term there were purges of generals and within the police of various figures considered not to be completely compliant with the vision of the regime,” she said. “The army and intelligence services are still important but not as an autonomous pole of power.”

She points to a new economic elite that has grown rich on infrastructure projects funded by petrodollars, a group that has grown to wield considerable influence.

Most notable among the businessmen is Ali Haddad, head of a construction company that has been one of the main beneficiaries of the country’s massive infrastructure programme. He also leads Algeria’s main business association, which looks after the interests of a group of entrepreneurs who have prospered in a country where the economy is still state-dominated.

Bouteflika’s offer on Sunday to organise an early presidential poll in which he would not be a candidate has been dismissed by protesters as a ploy to extend the rule of the opaque clan benefiting from his presence at the helm.

Attempts by officials including prime minister Ahmed Ouyahya to discourage protests, by raising the spectre of a descent into violence such as that in Syria, or to evoke memories of Algeria’s civil war of the 1990s that led to the deaths of an estimated 200,000 people, have also failed.

Yet analysts say the decision by the elite to put forward Bouteflika as their candidate showed the extent to which Algeria’s power brokers were in a state of crisis.

To push for five more years as president of a wheelchair-bound octogenarian who has not spoken publicly in years underlined how they had failed to come up with a viable alternative they trusted to protect their interests, said Dalia Ghanem Yazbeck, resident scholar at the Carnegie Middle East Center in Beirut.

“This is not just about Bouteflika,” she said. “This is about the entwined interests of an entire clan; his brothers, people from his region, the business elite. The protests are putting in jeopardy an entire system, including the interests of some in the military and the governing National Liberation Front party.”

Bouteflika has benefited from a level of popular support because he is credited with restoring stability to the country by his reconciliation policies following the bloodshed of the 1990s. He is also a member of a dwindling generation that fought in the war for independence which was achieved in 1962, a battle that has been used by successive regimes to give them legitimacy.

But the offer of early elections suggests that the regime had been caught off guard by the scale of the protests and is now playing for time as it scrambles to find a credible successor.

The problem, said Armstrong at the International Crisis Group, was that institutions such as Algeria’s parliament, political opposition, and judiciary have been weakened to such an extent that there are very few viable candidates.

With protests likely to continue ahead of the presidential poll next month, the pressure is mounting on Algeria’s shady elite to find a way out of a crisis.

“For an increasingly isolated regime, the process of coming up with a new candidate has become difficult and there will still be huge pressure from the street,” said Ms Armstrong. “Because Algerians have decided to step out of this charade of the emperor’s new clothes.” – Copyright The Financial Times Limited 2019