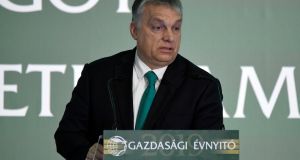 Fine Gael is to join 12 other parties from the European centre right in demanding the expulsion of Hungary’s prime minister from their European People’s Party (EPP) group.

A champion of what he calls “illiberal democracy” and anti-immigrant policies, Viktor Orban has become a stalking horse for Europe’s Eurosceptic populist forces. He is seen as having finally overstepped the mark with a state-funded billboard campaign attacking Brussels and European Commission president Jean Claude Juncker for organising an alleged conspiracy to foist immigrants on member states. Mr Juncker is an EPP party colleague.

Mr Orban has also been involved in a campaign with strong anti-Semitic overtones against the billionaire philanthropist George Soros, who he says is behind EU attacks on Hungarian sovereignty.

Hungary, with Poland, is currently the subject to an Article 7 disciplinary procedure in the EU’s Council of Ministers over democratic governance and human rights violations

MEP Sean Kelly, the leader of the four Fine Gael MEPs, says he will write to the party to propose the expulsion of Mr Orban’s Fidesz party at the EPP conference on March 20th. He says Mr Orban has gone too far and that the time has come for the EPP to defend its fundamental values.

The move, ahead of the European elections in May, would damage the EPP’s prospects in the European Parliament at a time when it is already being squeezed by the populist upsurge on the right.

Although another Fine Gael source last week suggested to The Irish Times that Taoiseach Leo Varadkar might be reluctant to oust someone who has been “very useful” in maintaining the unity of member states over Brexit, Mr Kelly insists that although that unity is important, there comes a point when the party has to act.

EPP rules provide that a motion for suspension can be proposed if backed by seven member parties from five different countries. There are 80 parties in the EPP and Mr Kelly expects that the motion will gain wide support.

There has been evidence in recent days of a fraying of the tolerance that has been shown to Mr Orban by important sections of the right in the party. Manfred Weber, the Bavarian conservative who is the EPP’s lead candidate in May’s European Parliament elections, said recently Mr Orban’s campaign had “severely damaged” the party.

Members of Mr Orban’s inner circle are reported to have made overtures to German leaders in recent days. Gergely Gulyas, his chief of staff, and confidante Zoltan Balog met Annegret Kramp-Karrenbauer, the leader of Germany’s Christian Democrats, the biggest party in the EPP, last week. And Mr Orban has heaped praise on Mr Weber, saying he will support him “until the end”.

But Mr Kelly says that Mr Orban has increasingly given the impression he would actually like to be expelled from the EPP and has made no concessions to those who would like to keep him.