US air strikes kill hundreds in Somalia as conflict escalates 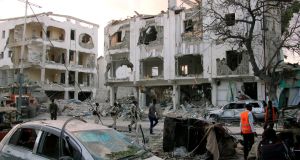 The US military has escalated a battle against al-Shabab, an extremist group affiliated with al-Qaida, in Somalia even as president Donald Trump seeks to scale back operations against similar Islamist insurgencies elsewhere in the world, from Syria and Afghanistan to West Africa.

A surge in US airstrikes over the past four months of 2018 pushed the annual death toll of suspected al-Shabab fighters in Somalia to the third record high in as many years. Last year, the strikes killed 326 people in 47 disclosed attacks, defence department data show.

And this year, the intensity is on pace to eclipse the 2018 record. During January and February alone, the US Africa Command reported killing 225 people in 24 strikes in Somalia. Double-digit death tolls are becoming routine, including a bloody five-day stretch in late February in which the military disclosed that it had killed 35, 20 and 26 people in three attacks.

Africa Command maintains that its death toll includes only al-Shabab militants, even though the extremist group claims regularly that civilians are also killed. The Times could not independently verify the number of civilians killed.

The rise in airstrikes has also exacerbated a humanitarian crisis in the country, according to UN agencies and nongovernmental organisations working in the region, as civilians are displaced by ongoing conflict and extreme weather.

“People need to pay attention to the fact that there is this massive war going on,” said Brittany Brown, who worked on Somalia policy at the National Security Council in the Obama and Trump administrations and is now chief of staff of the International Crisis Group.

The war in Somalia appears to be “on autopilot”, she added, and one that is drawing the United States significantly deeper into an armed conflict without much public debate. The intensifying bombing campaign undercuts the Trump administration’s intended pivot to confront threats from great powers like China and Russia, and away from long counterinsurgency and counterterrorism campaigns that have been the Pentagon’s focus since 2001.