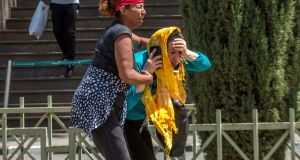 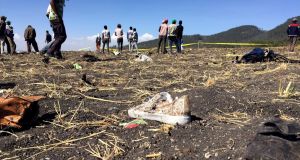 People the crash scene with debris scattered around them. Photograph: Tiksa Negeri/Reuters 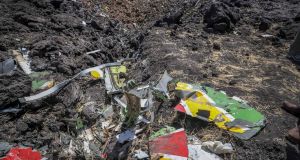 Wreckage lies at the scene of the crash some 50km south of Addis Ababa. Photograph: AP 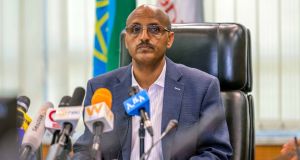 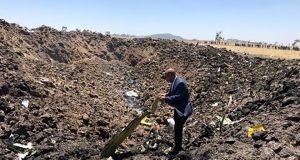 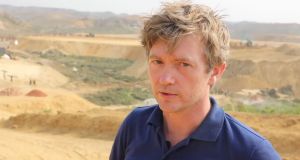 World Food Programme Deputy Chief Engineer, Michael Ryan from Co Clare who was killed when Ethiopian Airlines flight ET302 bound for Nairobi crashed minutes after take off from the capital Addis Ababa killing all 157 people on board.

There was shock in the seaside community of Lahinch, Co Clare, last night as it emerged local man Michael (Mick) Ryan was the only Irish victim of the Ethiopian Airlines plane crash.

The father-of-two, a United Nations aid worker, was one of 157 people killed yesterday morning when the four-month-old Boeing 737, flying from the Ethiopian capital Addis Ababa to Nairobi in Kenya, crashed shortly after take-off. There were no survivors among the 149 passengers and eight crew on Flight 302.

Mr Ryan, an engineer who worked for the UN World Food Programme’s engineering division, lived in Cork city. He was married and had two young children.

A UN World Food Programme spokesperson confirmed Mr Ryan was on board the flight and that the aid agency had been in touch with his family. He was one of at least 19 UN workers killed in the crash.

According to the airline, the pilot, who was experienced with an excellent flying record, reported difficulties and asked for permission to return to the airport at Addis.

The four-month-old Boeing 737 Max-8 jet crashed at 8.44am local time (three hours ahead of Ireland), six minutes after it took off.

Mr Ryan was travelling to an international UN aid conference in Kenya with a number of colleagues. He had been living in Cork in recent years, and worked out of WFP headquarters in Rome.

Our thoughts tonight are with families of all those lost in the Ethiopian Airlines crash, including Irish engineer Michael Ryan. Michael was doing life-changing work in Africa with the World Food Programme. Deepest sympathies to family, colleagues & friends

President Michael D Higgins led the tributes to the Clare man last night, after conveying the sympathies of the Irish people to all the families and communities affected.

Taoiseach Leo Varadkar said: “Our thoughts tonight are with the families of all those lost in the Ethiopian Airlines crash, including Irish engineer Michael Ryan.”

Mr Ryan, who was global deputy chief engineer with the WFP’s engineering division, worked on aid projects in Africa, Nepal and Bangladesh where he helped alleviate the Rohingya refugee crisis.

Son of Christina, a retired teacher in Ennistymon, and the late Jack Ryan, Mr Ryan had two sisters and a brother.

The four-month-old Ethiopian Airlines Boeing crashed yesterday six minutes after take off, killing all 149 passengers and eight crew, the airline said in a statement. It was en route to Nairobi in Kenya.

Among the passengers was Michael Ryan, formerly of Attychristoria, Lahinch, Co Clare.

The crash is the second in five months involving a Max 8 after a Lion aircraft delivered only 2½ months earlier nosedived into the Java Sea shortly after takeoff on October 29th, killing all on board. Kenya’s transport secretary James Macharia told reporters he could confirm there were nationals from at least 35 different countries on board.

Ethiopian Airlines confirmed that there were 32 people from Kenya, 18 from Canada, nine from Ethiopia, eight from China, eight from both Italy and America; seven from both France and the UK, six from Egypt, five from the Netherlands, four had UN passports, four from both India and Slovakia, three from Russia, three each from Austria and Sweden; two from Morocco, Spain, Poland, Israel and one each from Belgium, Indonesia, Uganda, Yemen, Sudan, Togo, Serbia, Mozambique, Norway, Rwanda, Ireland, Somalia, Saudi Arabia and South Africa on board.

This is the second disaster involving Being’s new 737 Max jet – the new model of the popular jet range recently launched by the US aviation giant – in less than six months. A Lion Air flight crashed into the sea near Indonesia last October, killing all 189 people on board.

Ryanair is planning to take delivery of Boeing 737 Max aircraft from next month. Its chief executive, Michael O’Leary, on Monday said that was not planning “any action at the moment” in response to the crash.

He told the Irish Independent that he would wait to see what the outcome of the investigation into the Ethiopian incident was, adding that he was “not particularly” concerned and expected that details would emerge on what caused the crash in the coming days and weeks.

“Like all other airlines around the world we will follow whatever guidance comes out from Boeing and EASA on the European side.”

Ethiopian Airlines said the aircraft crashed at about 8.45am, leaving no survivors. The cause of the crash was not yet known, it said. Visibility was clear but air traffic monitor Flightradar24 said “vertical speed was unstable after take off”.

The pilot had sent out a distress call and was given the all clear to return, according to the airline’s chief executive Tewolde Gebremariam. Mr Gebremariam was pictured picking through what little was left of the aircraft as he visited the site.

Senior captain Yared Getachew had a “commendable performance” having completed more than 8,000 hours in the air, the airline said. The aircraft had undergone a “rigorous” testing on February 4th, a statement continued. Records show the plane was new and delivered to the airline as recently as November. – Additional reporting Agencies