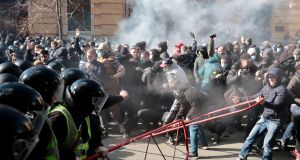 Ukrainian police say 25 officers have been hurt in clashes with ultra-nationalists who marched in Kiev and stormed a provincial election rally held by President Petro Poroshenko and tried to block his motorcade.

Far-right National Corps activists scuffled on Saturday with police guarding the presidential administration in the capital, and demanded action over a graft scandal that allegedly involves one of Mr Poroshenko’s close allies.

Members of the same party then tried to break through police lines protecting Mr Poroshenko’s campaign rally in Cherkassy, a city about 150km from Kiev, forcing him to make a hurried exit from the stage.

The protesters fought with police, briefly blocked Mr Poroshenko’s convoy and at least one man climbed on to a police car, before demonstrators took to the stage to demand that corrupt politicians and businessmen be jailed.

National Corps members have been at the forefront of protests over allegations that the son of Oleh Hladkovskiy, one of Mr Poroshenko’s confidantes, was involved in a scam to sell smuggled Russian military parts to Ukraine’s army at inflated prices.

Mr Hladkovskiy and his son deny the claims, but public outrage at the allegations and suspicions that the elite is profiting from Ukraine’s undeclared war with Russia prompted Mr Poroshenko to fire his close ally from the country’s national security and defence council.

A recent decision by Ukraine’s constitutional court to quash a law on illicit enrichment – which will force prosecutors to close dozens of corruption cases against officials, deputies and judges – has also thrown the focus on Mr Poroshenko’s patchy reform record as he bids for re-election on March 31st.

“Behind such actions stood and stand pro-Russian revanchists and oligarch-fugitives,” Mr Poroshenko’s party said in a statement about the violence.

“Since the start of Russian aggression [against] our state, we have asserted the right of Ukraine to be free and independent. That is why no one will manage to burn or break Ukraine from inside.”

Interior minister Arsen Avakov – who is widely believed to have influence with leading figures in the National Corps and the Azov volunteer battalion from which it sprang – denounced the clashes as “unacceptable”.

“Righteous anger over corruption crimes is just, but can it be allowed to give rise to other criminal activity? Of course not!” he said.

“I ask real patriots to think about the country and not tighten the spiral of hate and chaos that is destroying the country just as much as the corruption against which you rightly protest.”

Police said they detained two suspected ringleaders of the violent protesters in Cherkassy.

A recent decision to allow members of the far-right National Militia to act as election observers stoked fears of trouble on voting day. “Only the independent central election commission should administer the election and count the votes,” US ambassador to Kiev Marie Yovanovitch said last week.

“Civil society observers and campaign staff should not be intimidated or harassed. Official, apolitical security should ensure that ‘titushki’ [paid hooligans] or other armed groups do not stop voters from expressing their will.”