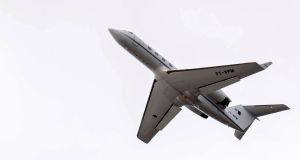 Gulfstream jet thought to be carrying Algerian president Abdelaziz Bouteflika takes off from Geneva where he had been hospitalised. Photograph: Martial Trezzini

Algerians began five days of general strike on Sunday, as protests against the rule of the ailing president, Abdelaziz Bouteflika, entered a new phase.

Shops across the country were closed and groups of workers gathered in the streets, brandishing flags and signs objecting to Bouteflika’s attempt to serve a fifth term in office, as social media posts implored citizens to enact civil disobedience and refuse to attend their jobs for the rest of the working week.

“You have a date with history,” said the national syndicate for electricity and gas workers, which represents employees of the national gas company Sonelgaz and has declared its allegiance to the strike. “Now is the time for all free workers to participate in this movement,” it said.

Hundreds of thousands of people took to the streets across Algeria on Friday, marking the third week of demonstrations against the rule of 82-year-old Bouteflika. What began as protests against his bid for a fifth term as president quickly expanded into opposition to the entire regime around the infirm leader, who has rarely been seen in public since suffering a stroke in 2013.

An Algerian government aircraft, believed to be transporting Bouteflika, left Geneva on Sunday afternoon, where he had been receiving medical treatment. He previously warned protesters of the risk of “infiltration” by “misleading parties” and offered to hold another election to choose his successor if re-elected in April.

Algeria’s leaders attempted to maintain an image of control amid the growing protests. “The people and the army have a unified vision of the future,” said Gaid Salah, the head of the country’s military. Algeria’s education ministry combatted a mass student strike by bringing forward the spring holiday originally scheduled for March 21st and extending it until April 4th.

Despite the government’s efforts to contain the protests, some workers from the country’s energy sector, a lifeline to the regime which accounts for an estimated 30 per cent of the country’s gross domestic product, joined the strike on Sunday, the first day of the working week in Algeria.

Video posted to social media appeared to show employees of the state oil and gas giant Sonatrach protesting in the town of Bejaia. The company employs an estimated 120,000 people and is considered the backbone of the industry, but declined to comment on the strike. “Sonatrach has nothing to do with the strike,” said an employee who answered a call to its offices.

Some private companies took a different approach. Cevital, the largest private conglomerate outside of Algeria’s energy sector with 18,000 employees, tweeted a statement of support for the strike, saying it was “united with the movement for a general strike chosen by civil society to demand a change to the system.”

Riccardo Fabiani, a senior geopolitics analyst at Energy Aspect, said the strike could rattle Algeria’s leaders should oil and gas field engineers, or those working on energy pipelines and transportation, choose to participate, thereby affecting energy output in the third-largest supplier of natural gas to Europe.

He said: “It’s a direct existential threat to the regime, as energy production is effectively the lifeline of the country. If instability propagates and reaches the sector, the regime would be in panic mode. This is the kind of shock that can alter the balance of the current standoff.” – Guardian News and Media 2019