UK's foreign secretary, Jeremy Hunt, has said that a rejection of Theresa May's Brexit deal in the House of Commons would be devastating for the Conservative party. Video: BBC/ The Andrew Marr Show 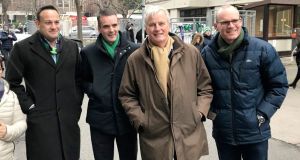 UK prime minister Theresa May has been warned she faces another crushing House of Commons defeat for her Brexit deal unless she can secure an eleventh-hour change to the Northern Ireland backstop.

Steve Baker, the deputy chairman of the pro-Brexit Tory European Research Group, and DUP deputy leader Nigel Dodds said without concessions from Brussels, defeat in the Commons on Tuesday is “inevitable”.

The warning comes amid reports that Cabinet ministers have told Mrs May the only way she will get her deal through UK parliament is if she agrees to stand down by June.

Discussions were continuing in Brussels between officials over the weekend with little sign of a breakthrough.

It follows an acrimonious Twitter exchange between the EU’s chief negotiator Michel Barnier and Brexit Secretary Steve Barclay, with Mr Barclay accusing the EU of attempting to “rerun old arguments”.

Mrs May had been pinning her hopes on securing legally binding changes to the backstop to convince MPs that the UK cannot be tied indefinitely to EU rules against its wishes.

An RAF plane is reported to be on standby to fly her to Brussels to clinch a deal if an agreement is in sight.

But with time running out, the chances of that happening appeared to be receding.

Mr Barnier is meanwhile in Dublin on Sunday to attend the Ireland-France Six Nations rugby match with his sons on what has been described as a private visit.

Taoiseach Leo Varadkar met him socially and was photographed outside the Aviva stadium with him before the game.

Mr Varadkar earlier on Sunday warned that “even the most benign Brexit will be inferior to the current relationship that we have with the UK”. He was speaking at the launch of a Government plan to secure future jobs for the economy.

The Minister for Business Heather Humphreys said the Irish Government is open to any request from the UK for an extension of the Article 50 withdrawal process, delaying the UK’s March 29th departure date.

“We have the withdrawal agreement and that took 18 months to put together. We do believe that this is the best option in terms of Brexit, and there is nothing particularly good about Brexit but nevertheless we fully support the withdrawal agreement. In terms of any extension that is required, or requested by the UK Government, we certainly remain open to looking at that along with our EU partners,” she said.

The cabinet will meet on Monday morning ahead of a series of expected key votes in Westminster.

In a joint article for the Sunday Telegraph, Mr Baker and Mr Dodds described the situation as “grim” and warned that after January’s 230-vote defeat in the first “meaningful vote”, Mrs May appeared set for another heavy reverse.

“An unchanged Withdrawal Agreement will be defeated firmly by a sizeable proportion of Conservatives and the DUP if it is again presented to the Commons,” they wrote.

“If with the DUP just half of previous Conservative opponents vote against the deal, a three-figure majority would be expected.”

There had been speculation that if Mrs May could get the majority against the deal down to below 50, she could try to bring it back for a third “meaningful vote” — but another three-figure reverse would make that difficult.

Mrs May has said that if the vote is lost she will give MPs the chance to vote against leaving the EU with no-deal and to request an extension of the Article 50 withdrawal process, delaying the UK’s March 29th departure date.

Mr Baker and Mr Dodds warned that if that happened, it would cause “incalculable” damage to public trust in politics.

“For some, democracy would be effectively dead,” they said.

Meanwhile, the UK’s attorney general Geoffrey Cox has said he will not change his legal opinion on the backstop unless he is convinced there is no longer a risk the UK can be trapped in it indefinitely.

In his original legal advice, drawn up last November, Mr Cox said that under the terms of the backstop, the UK could be trapped in “protracted and repeated rounds of negotiations” for years ahead.

Since then, Mr Cox has taken a leading role in the UK Government’s efforts to secure changes to the backstop, leading some Tory Brexiteers to warn he will be “marking his own homework” when he comes to give his legal opinion on them.

However he told the Mail on Sunday: “I will not change my opinion unless I’m sure there is no legal risk of us being indefinitely detained in the backstop.

“I am putting my hand on my heart. I will not change my opinion unless we have a text that shows the risk has been eliminated. I would not put my name to anything less.”

Just 19 days before the United Kingdom is due to leave the EU on March 29, Mrs May is scrambling - so far unsuccessfully - to secure last-minute changes to an EU exit treaty before parliament votes on Tuesday on whether to approve the deal.

If she fails, lawmakers are expected to force Mrs May to seek a delay to Brexit which some fear could see the 2016 decision to leave the bloc reversed.

Others argue that without a delay Britain faces an economic shock if it leaves without a deal.

“We have an opportunity now to leave on March 29th or shortly thereafter and it’s important we grasp that opportunity because there is wind in the sails of people trying to stop Brexit,” Mr Hunt told the BBC. “We are in very perilous waters.”

The United Kingdom’s labyrinthine crisis over EU membership is approaching its finale with an extraordinary array of options including a delay, a last-minute deal, no-deal Brexit, a snap election or even another referendum. The ultimate outcome remains unclear, though most diplomats and investors say Brexit will define the United Kingdom’s prosperity for generations to come.

The government has previously tried to use the risk of Brexit being reversed as a way to convince eurosceptics to back Mrs May’s deal despite their deep reservations about it.

Mr Hunt said Tuesday’s vote would definitely go ahead, and that it was too soon to say that negotiations with the EU had “run into the sands”. He said realism and a lot of work was needed from both Britain and the EU to get a deal.

“In the event of this vote on Tuesday not going through, nobody knows what would happen. In everything that followed there would be total uncertainty - that would be the only certainty,” health minister Matt Hancock told Sky News.

Britain’s opposition Labour Party should support staying in the EU if there is a second referendum, the party’s Brexit spokesman, Keir Starmer, said on Sunday. However, Mr Starmer said the party would not be seeking to secure support in parliament for a second referendum on Tuesday.

Amid the political chaos, many company chiefs are aghast at London’s handling of Brexit and say it has already damaged Britain’s reputation as Europe’s pre-eminent destination for foreign investment.

“Business is holding its breath ahead of the votes in parliament this week, knowing that if Brexit has taught us anything, it is to expect the unexpected,” said James Stewart, head of Brexit at KPMG UK.

“Companies are now split on whether an extension to the Brexit timeline is a good thing. Some of those who prepared early are locked into March specific contingency plans. Those carrying additional inventory know an extension will squeeze their cashflow for longer.”