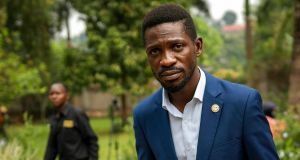 A Ugandan high court ruled on Monday that opposition leader and former presidential candidate Bobi Wine should be released from house arrest.

If they had committed any crime, Mr Wine and his wife, Barbara Itungo, should have been charged and taken before a court of law earlier, the judge said.

The couple have been held in their home, in Magere, the outskirts of Kampala, since the days after the January 14th presidential election, of which long-time leader Yoweri Museveni was declared the winner.

Security forces have repeatedly accused Mr Wine of violating coronavirus restrictions, and lawyers for the government allege he could incite riots if he is allowed to move freely.

Last week, Mr Museveni gathered thousands of people as he drove what was effectively a victory lap from western Uganda to the capital. He was greeted by a brass band and crowds, many unmasked as they danced and cheered.

The election saw the 76-year-old incumbent, in power since 1986, win with almost 59 per cent of the vote, against 35 per cent for Mr Wine, a musician exactly half his age. Mr Wine, the self-styled “ghetto president” whose real name is Robert Kyagulanyi, has huge support among young people in a country with a median age of about 16.

The internet was blocked nationwide during the election. On some internet providers, various news sites, including The Irish Times, remain blocked. Social media is still inaccessible without a virtual private network, a piece of software that protects privacy online, and the websites of many VPNs are unreachable. Despite this, both the government and the opposition continue to broadcast press conferences on Facebook.

In a statement on Friday, Mr Wine said his “spirit is strong”.

“We went into this election knowing the nature of the regime we were up against, but trusting the people of Uganda to assert their voices. Like many other ruthless dictators, Museveni organises elections in order to pay lip service to democracy and to try to buy legitimacy from the world,” he said.

“When I was nominated to run for president, I informed the nation that this was not just a mere election but a revolution. I want to tell you today that this revolution is going on and nothing will stop it.”

The Irish Times visited Mr Wine at his home on January 15th, the day after voting. Armed men in military uniforms had jumped over his walls, with one pointing a gun at a journalist. Mr Museveni had already taken an early lead, something Mr Wine decried as “daylight robbery” while alleging that the election had been rigged. The following day, we were prevented from entering Freedom Drive, the road on which Mr Wine lives.

Opposition supporters, including academic Stella Nyanzi – who was previously jailed for insulting Mr Museveni’s mother through poetry – have called for protests outside Mr Wine’s home, but they have not taken place. “None of us is free when one of us is under house arrest,” Ms Nyanzi said.

Bobi Wine has also made a submission to the International Criminal Court, calling for Mr Museveni and senior Ugandan government officials to be charged with crimes against humanity for overseeing the killing of civilians, protesters, and opposition figures in the run-up to the election.