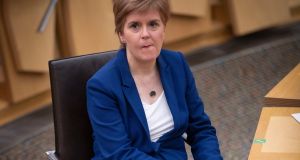 Scottish first minister Nicola Sturgeon: she said if Boris Johnson refuses to authorise an independence vote he will have to challenge the referendum’s legitimacy through the courts. Photograph: Jane Barlow/PA Wire

The leader of Scotland’s Conservatives has called on Scottish unionists to boycott any independence referendum called by the Scottish government without the agreement of Westminster.

Douglas Ross was speaking after Nicola Sturgeon confirmed that if her Scottish National Party (SNP) wins next May’s Holyrood elections, she will press ahead with plans for a second independence referendum.

Ms Sturgeon said that if British prime minister Boris Johnson refuses to authorise such an independence vote he will have to challenge the referendum’s legitimacy through the courts.

“I would absolutely boycott that,” Mr Ross told the right-wing Centre for Policy Studies . “We were told the 2014 referendum was a gold standard of referendums. Nicola Sturgeon accepted that. If that is the gold standard, then no one who not just believes in the union but who believes in democracy should enter into this wildcat referendum that would have no actual bearing in terms of the outcome being enforceable.”

The SNP on Sunday published an 11-point “route map” towards a second referendum, promising to publish a draft independent referendum bill before May’s elections. If the SNP wins a majority or can form one with another pro-independence party it aims to hold a referendum after the end of the coronavirus pandemic.

“The SNP Scottish government continues to maintain that a referendum must be beyond legal challenge to ensure legitimacy and acceptance at home and abroad. This is the surest way by far of becoming an independent country,” the plan says.

The 2014 referendum was held after the Scottish government sought a section 30 order from the Westminster government under the Scotland Act 1998. Under the devolution settlement, power over constitutional issues and the future of the 1707 union between England and Scotland is reserved to Westminster.

Mr Johnson has ruled out granting a section 30 order, which would grant those powers to Holyrood for the purpose of holding a second independence referendum.

“In these circumstances in which there has been an unambiguously expressed democratic decision by the people of Scotland and their parliament to have a legal referendum the choice of the UK government will be clear; to either (1) agree that the Scottish parliament already has the power to legislate for a referendum or (2) in line with precedent, agree the section 30 order to put that question beyond any doubt or (3) take legal action to dispute the legal basis of the referendum and seek to block the will of the Scottish people in the courts. Such a legal challenge would be vigorously opposed by an SNP Scottish government,” the SNP plan says.

Former Labour prime minister Gordon Brown warned Mr Johnson on Monday that he must reform the constitutional basis of the union or risk Britain becoming a failed state. Writing in the Daily Telegraph, Mr Brown said coronavirus had exacerbated divisions between London, the English regions and the constituent parts of the United Kingdom.

“I believe the choice is now between a reformed state and a failed state. So Boris Johnson should announce that when Covid-19 is finally under control he will set up the commission on democracy his election manifesto promised, and state that it will review the way the whole of the United Kingdom is governed.”