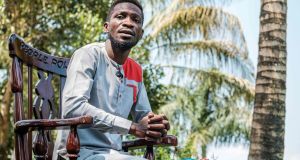 Uganda’s opposition has petitioned the International Criminal Court (ICC) to begin an investigation into senior government officials – including long-standing president Yoweri Museveni – for crimes against humanity.

At a press conference at his home in northern Kampala on Friday, presidential candidate Bobi Wine accused Mr Museveni of carrying out more crimes than Joseph Kony, the infamous leader of Ugandan rebel group the Lord’s Resistance Army (LRA).

“History has gone around and now General Museveni is committing more atrocities,” he said.

The popular musician, whose real name is Robert Kyagulanyi, is running for president in next Thursday’s election – the most eagerly anticipated in decades.

“We hope that the ICC can help since all the local courts are literally in the hands, and in the pockets, and in the very firm grip of [Mr Museveni].”

The 47-page submission was drafted by a US-based lawyer, Bruce I Afran, who is acting on behalf of Wine, opposition MP Francis Zaake and Amos Katumba, who works with the charity Caring Hearts Uganda.

It references the killing of at least 54 civilians by security forces in November, when protests erupted after Wine was arrested and accused of violating coronavirus restrictions.

The submission also references other attacks on opposition politicians and supporters, including the arrest and alleged torture of Mr Zaake last April, after he tried to distribute food to his constituents during a coronavirus-related lockdown; and arrests, alleged torture and assassination attempts against Wine.

It accuses Mr Museveni of inciting violence by saying protesters will be “crushed” and that beating is acceptable if “done in the right way”.

The International Criminal Court receives hundreds of submissions each year, and only a small number go on to further investigation.

Uganda is a signatory to the Rome Statute, which set up the ICC. The court’s very first ICC indictments, which were brought in 2005 against five LRA commanders, happened after Mr Museveni asked for an investigation into the conflict in northern Uganda.

On February 4th, the court is due to rule on a case against Dominic Ongwen, a former LRA commander charged with 70 counts of war crimes and crimes against humanity. Mr Ongwen was kidnapped as a child and stayed in the group until 2015.

On Thursday evening, Wine was live on Zoom with international journalists, speaking about the ICC filing, when he was dragged backwards out of his car by a policeman, who accused him of parking illegally.

After Wine’s car was driven away, police continued to flank it, visibly shooting live ammunition into the air. Wine said this was an example of the constant harassment he is experiencing.

The candidate has repeatedly called on other countries to make trade and aid in Uganda conditional on human rights being respected.

Uganda is one of nine Irish Aid “partner countries”, and Ireland budgeted to spend ¤82.9 million eurothere between 2016 and 2020.