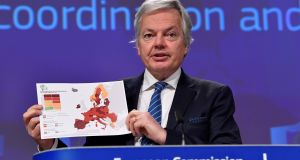 EU commissioner for justice Didier Reynders: Rules around international travel should cohere with any restrictions on movement within countries, he said. Photograph: John Thys/EPA/pool

All travellers leaving Ireland for other EU states should have a negative Covid-19 test before departure, and go into quarantine on arrival as well, under new proposals laid out by the European Commission.

All non-essential travel is “strongly discouraged” under the proposals, which come amid rising pressure from EU national governments to clamp down on travel within the bloc.

Belgium has banned tourism and Germany warned it could close its borders unless tougher joint restrictions are agreed, due to alarm over the potential for new variants of Covid-19 to worsen a fresh wave of infections on the continent and render vaccines less effective.

The new proposals create a new “deep red” category for countries that have an average of more than 500 cases of infection per 100,000 in a two-week period under the EU’s traffic light system, allowing for tougher restrictions on travellers from such countries.

At more than 1,444 cases per 100,000, Ireland currently has the highest rate on the European Centre for Disease Prevention and Control’s chart, so travellers from the Republic would be subject to the tougher rules until the rate can be brought down.

“There is currently a very high number of new infections across many member states, and there is an urgent need to reduce the risk of travel-related infections to lessen the burden on overstretched healthcare systems,” said commissioner Didier Reynders.

The new guidance recommends that even essential travellers “such as healthcare workers, people travelling for imperative family or business reasons”, should be required to have a negative test and undergo quarantine if they are coming from “dark red” areas like Ireland – “provided that this does not have a disproportionate impact on the exercise of their essential function or need.”

Member states are free to set their own testing and quarantine policy for arrivals, such as whether travellers can self-isolate at home or be housed in designated accommodation such as hotels, as long as the rules are proportionate and non-discriminatory. In general, rules around international travel should cohere with any restrictions on movement within countries, Mr Reynders said.

“There are examples of countries in the EU and also outside the EU where travellers would be invited to quarantine in hotels. But that’s something that needs to be planned, implemented and decided at national level,” an EU official said.

Under the proposals, there are special exceptions for residents of border areas who cross an international boundary to attend school or go to work. Such people “should not be required to undergo quarantine” and testing frequency should be “proportionate”, according to the proposals. It’s a pressing issue for states such as Luxembourg, where 62 per cent of hospital workers commute from neighbouring countries, according to the health ministry.

The plan, which must now go before member states for approval, was accompanied by new proposals on travel from outside the EU.

All travellers arriving from non-EU countries should be required to have a negative PCR Covid-19 test less than 72 hours before departure, and undergo additional testing and quarantine for up to 14 days, under the proposals. Exceptions could be drawn up for specific categories of workers, such as aircraft crew, who could be required to take less-accurate rapid antigen tests on arrival instead, according to the proposals.

This guidance relates to countries that are part of the Schengen Area of passport-free travel, which Ireland is not part of, so the proposals do not apply to Ireland unless the Government chooses to align with them.

“If it’s not essential travel, they should not come at all,” said commissioner Ylva Johansson. “It’s up to member states to define how they can do it in the best way. But the first recommendation is: don’t travel.”