New law would be first for Arab world, where men get double share of female descendants 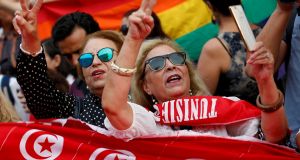 Tunisia’s president Beji Caid Sebsi says he will push for a new law to ensure equality in inheritance between men and women, in a first for the Arab world where legislation derived from Islam gives male descendants twice the share of females.

“I say equality of inheritance should become law,” Mr Sebsi said in a speech on Monday to coincide with Tunisian women’s day, stressing that the country’s secular constitution assured equality between all citizens.

In a nod to religious feeling in the Muslim country, he said any legislation – which would have to be debated and approved by parliament – should allow those who wanted to apply Islamic rules instead to pass down their property according to their wishes.

“As the president of all Tunisians, my duty is to unite and not to divide,” he said.

While the proposal that was first floated last year has upset traditionalists in the country, the conservative Nahda party that is part of Mr Sebsi’s governing coalition took a neutral view. “In principle we are not opposed,” said Said Ferjani, a senior figure in the Islamist-rooted party who said the possibility to opt out of the new law would be a welcome step.

Tunisia is the only country in the Arab world that has made a successful transition towards democracy following the Arab uprisings of 2011. The country’s Islamists and secular forces have forged a pact that has largely kept the peace, even if politics and the economy are often in crisis.

However, the publication in June of a report commissioned by Mr Sebsi into gender equality and other personal freedoms has angered Islamist groups in Tunisia. The report recommended not only equal inheritance rights but also the abolition of capital punishment and the decriminalisation of homosexuality, sparking weeks of protest.

Over the weekend, thousands of people protested in front of the parliament building in Tunis against the proposals, which they view as part of a broad attempt to undermine Islam in a country which has always been governed by a secular elite.

However, Bochra Belhaj Hmida, a lawyer who led the commission that wrote the report, accused opponents of spreading disinformation to whip up public sentiment.

“They portray the decriminalisation of homosexuality as allowing gay marriage whereas it just means that people should not go to jail,” she said. “They also fail to point out that it would be possible to opt out of equality of inheritance.”

Since the 1950s, Tunisian family laws have departed from Islamic orthodoxy by banning polygamy and restricting a man’s unfettered right to divorce his wife.

These laws, unmatched anywhere in the Arab world, were adopted under the rule of Habib Bourguiba, the country’s first post-independence ruler, an authoritarian who also saw himself as a moderniser.

Analysts say Mr Sebsi, who is in his 90s and served under Mr Bourguiba, wants to leave a similar legacy. The president last year scrapped administrative rules which prevented the recognition of marriages between Muslim Tunisian women and non-Muslim men. – Copyright The Financial Times Limited 2018