US joins condemnation of media crackdown in Belarus 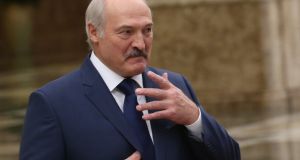 Belarussian president Alexander Lukashenko: critics accuse Mr Lukashenko of launching his latest attack on those who challenge him in the media or political arena. Photograph: Mikhail Svetlov/Getty Images

The United States has joined international condemnation of a crackdown on independent media in Belarus, where security forces loyal to veteran autocrat Alexander Lukashenko have detained several journalists and searched their homes and offices this week.

About a dozen journalists reportedly have been detained over the last three days, several of whom work for two of the leading independent news outlets in Belarus – Belapan and Tut.by – which still dare to criticise Mr Lukashenko and his 24-year presidency.

They are suspected of accessing unauthorised information from a state news agency, and in some cases security service agents have confiscated computers and other equipment from their apartments and newsrooms.

Some reporters have been released after questioning, but on Thursday the Belarusian investigative committee held Iryna Leushyna, the chief editor of Belapan.

The news agency said that she failed to appear for work in the morning and did not answer her phone, and her daughter found signs that her flat and her computer had been searched.

Investigators started detaining journalists after the state-run Belta news agency complained to the police that some media were using other outlets’ passwords to access its content.

Critics say the allegations hardly merit such a police operation, however, and accuse Mr Lukashenko of launching his latest attack on those who challenge him in the media or political arena.

The former collective farm boss, under whom Belarus retains elements of the Soviet-style command economy, has long played off the West and Russia against each other, hinting at liberalisation before once again tightening the screws on opponents.

“We are concerned by authorities’ searches and arrests of journalists this week at several independent media organisations’ offices,” the US embassy in Minsk said on Thursday.

“The United States will continue to closely monitor this situation and joins calls for the government of Belarus to immediately release all journalists to guarantee the rights of citizens to free speech and media freedom.”

After Paulyuk Bykowski, a local correspondent in Minsk for Deutsche Welle, was detained on Wednesday, Germany lodged a protest with the Belarusian embassy in Berlin and called for “protection of the basic principles of freedom of the media and opinion”.

The EU delegation in Belarus said that its head, Andrea Wiktorin, and ambassadors in Minsk from several member states visited the offices of Tut.by and Belapan on Wednesday to hear about their ordeal.

“Respect for the fundamental rights and freedoms, including freedom of expression and of media, needs to be upheld,” the EU mission said in a statement.

“The EU will continue to closely monitor the situation in this regard, including via the EU delegation in Minsk.”

Leading international media watchdogs also denounced events in Belarus, which this year ranks 155th out of 180 countries in a world press freedom index compiled by Reporters Without Borders.

The head of the organisation’s eastern Europe and central Asia desk, Johann Bihr, said the raids appeared to be a bid to “intimidate leading independent media outlets at a time of growing harassment of critical journalists”.