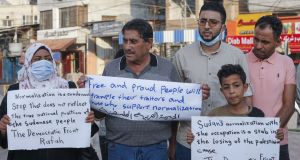 Sudan and Israel are set to discuss trade, aviation, agriculture and migration agreements in coming weeks in an effort to implement the third “normalisation deal” with an Arab country brokered by the Trump administration.

However, facing a sharp division between proponents and opponents of the deal, Sudan’s foreign ministry has given no timeframe for negotiations.

Sudanese acting prime minister Abdalla Hamdok has said the deal cannot be implemented until ratified by the legislature installed after the 2022 election.

Foreign minister Oman Qamar al-Din echoed his line. “This is an agreement to normalise. It is not normalisation. We must wait for Sudan’s democratic institutions to be functional, including the legislative council, so we can complete ratification,” he said.

The division is between civilian politicians answerable to the public and military officers who jointly rule through an interim authority formed after the 2019 overthrow by a popular revolution of the country’s 30-year president Omar al-Bashir.

Speaking for the military, Gen Hamdan Dagalo said: “We need Israel. Israel is a developed country and the whole world is working with it.”

Supporters of the deal argue that for accepting normalisation, the US lifted Sudan’s designation as a state sponsor of terrorism due to the hosting by the Bashir regime of al-Qaeda founder Osama bin Laden in the 1990s. This allows Sudan to secure international funding.

However, the US stirred resentment by compelling desperately poor Sudan to pay $335 million to victims of al-Qaeda’s 1998 bombings of US embassies in Kenya and Tanzania.

Opponents of the deal vowed to form a national front against normalisation as demonstrations erupted in Khartoum. Veteran politician Sadiq al-Mahdi, Sudan’s last democratically elected premier, said negotiating with Israel “contradicts Sudanese law, contributes to the elimination of the peace project in the Middle East and prepares the way for the launch of a new war”.

He warned the deal will jeopardise the authority of the fragile transitional government.

Al-Mahdi (84), an Oxford graduate and author, is an iconic figure in Sudan. He is a politician, a leader of a Sufi order, and the great-grandson of The Mahdi, Muhammad Ahmad, the charismatic leader who rebelled against Anglo-Egyptian rule over Sudan and defeated and killed Britain’s general George Gordon in the 1885 battle of Khartoum.

He created a short- lived Islamic state stretching from Sudan to central Africa and is seen by many Sudanese as the embodiment of Sudanese nationalism.

According to the Arab Opinion Index, 85 per cent of Sudanese of all ages and backgrounds reject normalisation with Israel and 77 per cent believe the Palestinian issue belongs to all Arabs and not just Palestinians who condemn normalisation until they achieve self-determination.