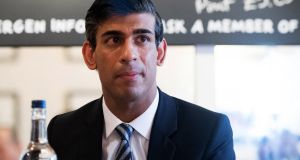 UK chancellor Rishi Sunak was locked in an acrimonious spat with education secretary Gavin Williamson on Monday as accusations flew over who was to blame for the dispute over food vouchers for disadvantaged children in England.

Mr Sunak was furious to read claims that the treasury was responsible for blocking the £20 million-a-week extension of free school meals with vouchers for deprived children over the half-term and Christmas holidays.

The row has pitted the government against Marcus Rashford, the Manchester United footballer who has campaigned for the food voucher scheme, and has dismayed many Tory MPs.

Prime minister Boris Johnson hinted on Monday that the government would draw up a new scheme to help disadvantaged children over Christmas, but the affair has already caused the Conservatives significant political damage.

Mr Sunak denies he is responsible and rejected claims by the Sun on Sunday, headlined “Rishi vs Rashi”, that the treasury had “parked the bus” to stop the extension of free school meals.

“There has been no new proposal from the department for education about releasing cash for this half-term,” said one ally of the chancellor, who suspected Mr Williamson’s team of briefing the story. “It’s pathetic, really.”

Mr Sunak agreed with Mr Williamson earlier in the year that cash should be made available for extending free school meals with food vouchers during the spring half-term because schools were closed at the time because of the pandemic.

That policy was extended to the summer holidays after a previous campaign by Mr Rashford, but Mr Sunak expressed his misgivings at the time about the precedent this might set.

Mr Williamson, Mr Sunak and Mr Johnson agreed they would hold the line against future campaigns for free school meals or vouchers to be provided during holidays once schools had reopened – as is now the case.

“If Gavin has changed his mind then he should have put in a spending proposal on it,” said the ally of the chancellor. “There haven’t even been informal discussions about it.”

Downing Street said the policy not to issue meal vouchers this half-term was “a government decision”.

Mr Williamson’s team declined to comment. But one civil servant said a failure to ask for money was in part down to treasury intransigence and a “computer says no” attitude to funding requests from the department for education.

Mr Sunak will oversee a one-year review of government spending next month, which is likely to see more money released to help disadvantaged families over the Christmas holidays.

Mr Johnson said: “We don’t want to see children going hungry this winter, this Christmas, certainly not as a result of any inattention by this government – and you are not going to see that.”

Many Conservative MPs feel the government has failed to persuade the public that it has an alternative strategy – including £63 million of grants to local councils – to help disadvantaged children during school holidays.

Last week Labour forced a House of Commons vote on a proposal to extend free school meals to the holidays but lost by 261 votes to 322. Keir Starmer, the Labour leader, is threatening to hold another vote to test Tory unity.

One senior Tory MP said last week’s tough party line in the Commons had been “partly stoked up” by Mr Williamson, who regarded free school meals as “a left-wing issue”. Others have blamed Mr Sunak or Number 10.

Some Conservative MPs have warned party whips that the issue is “cutting through” with voters in a highly damaging fashion, comparing it to the row over the April trip to Durham by Dominic Cummings, Mr Johnson’s chief adviser.

Bernard Jenkin, Tory chairman of the influential Commons liaison committee, said the government had “misunderstood the mood of the country”. One Conservative MP said: “The mood is poor. This is an unnecessary own goal.”

Labour attacks on the government on the issue have drawn some Tory MPs into “Twitter rows”, while some Conservatives have privately complained the free school meals row had been fuelled by left-wing “virtue signalling”.

A senior Tory said that in one party WhatsApp group an MP wrote the school meals demand would be followed by funding for toilet paper. – Copyright The Financial Times Limited 2020