US election: Trump voters energised in North Carolina but state is on a knife-edge

Once a stronghold of southern conservatism, North Carolina is now a swing state 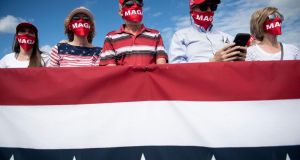 It’s just past noon at Webb Custom Kitchen off Main Street in Gastonia and locals are beginning to file in for lunch at one of the best eateries in town. The restaurant made headlines a couple of weeks ago when it received a surprise visitor. Ivanka Trump and her son dropped in for dinner during a campaign visit by the president’s daughter.

Megan Jones, the waitress who served her, said she thought her colleagues were joking when they told her who was at her assigned section. Then she noticed the Secret Service. “I couldn’t believe it, I slipped outside to call my mom,” the 24-year-old recalls as she describes her encounter with the first daughter.

Jones says that while some of her colleagues were not so comfortable about the Trump visit, she says she is happy to serve anyone, regardless of their politics. But she admits she is a Trump supporter. “My entire family is. I’ve already voted, and voted for him,” she says.

Jones is in good company. This part of North Carolina is strong Trump country – one of the counties where the president is hoping to run up high margins to counterbalance an expected Democratic surge elsewhere in the state.

North Carolina is an archetypal purple state. Once a stronghold of southern conservatism, it has gradually become more of a swing state, due in part to the highly educated, Democratic-leaning constituency that has developed near the university towns of Durham and Raleigh in the north. Barack Obama won North Carolina by less than one percentage point in 2008, but lost to Mitt Romney in 2012. Donald Trump won here by just under 4 percentage points in 2016.

Both sides are eyeing the state this time around, with its coveted 15 electoral college votes. A Washington Post-ABC poll this week shows a dead heat, with Trump at 48 per cent, marginally behind Biden at 49 per cent.

Here in Gaston County, Trump is highly popular. Located just to the west of Charlotte, the state’s largest city, it voted for Trump by about two to one in 2016. In contrast to neighbouring Mecklenburg County, which spans Charlotte and where about a third of the population is black, Gaston County’s residents are 85 per cent white.

Some 3km east of downtown Gastonia, preparations are under way at the local Republican party headquarters for the president’s rally this week. The office, which doubles as a merchandise store, is located in a shopping mall just on the outskirts of town.

Although many of the store fronts are shuttered, the centre is gradually reopening as the impact of the coronavirus pandemic eases here, and the GOP store is packed. “Since they announced the president is coming here, we’ve been rushed off our feet,” says Linda Smith, a 76-year-old Republican volunteer who works at the store.

Wearing a pink Women for Trump T-shirt, she is helping customers choose merchandise from the array of yard signs, baseball caps and Trump socks on offer in the store.

As we speak, local woman Dorita Criss, wearing full Trump paraphernalia including a stylishly embroidered face mask, interrupts to ask if they had received a new shipment of Women for Trump pink hats as promised. She has been back every day to pick up new merchandise.

Workers are also signing people up for the Trump rally, which is due to take place at the local air field. A sign showing parking and shuttle sites for the rally is on the display at the front of the store.

Holding their new Trump/Pence yard signs, friends Robert and Tim tell me they believe Trump is going to win big again in Gaston County. Both men work as barbers, and Robert served time in the army, like many in this state, which counts a high number of military personnel among its population. “He’s put this country first, and that’s what matters,” Robert says of the president.

Support for Trump is not ubiquitous, however. Local woman Sharda Cook, who is African-American, says she has already cast her vote – for Joe Biden. Originally from North Carolina, Cook lived in California for many years, but recently moved back to the area with her three children.

“It’s very different here,” she says. “I work at a store, and people really tell you how they’re going to vote, how much they like Trump. I just don’t say much when customers start talking politics.”

Michael Bitzer, professor of politics and history at Catawba College in North Carolina, says the state’s polarisation in terms of voting patterns means the key focus for both presidential candidates will be turnout.

Like other parts of the country, North Carolina has already witnessed a surge in early voting. “This year absentee by mail has gone through the roof,” explains Bitzer. As of Tuesday this week, more than 2 million votes had already been cast in North Carolina.

In addition to the presidential race, which is likely to be one of the tightest in the country, North Carolina is also holding a closely watched Senate race, which could hold the key to Democrats winning control of the upper chamber on November 3rd.

Incumbent Republican senator Thom Tillis is facing a strong challenge from Cal Cunningham. A moderate Democrat who has highlighted his military service and local connections, Cunningham has amassed millions in fundraising and was seen as one of the Democrats’ best chance of flipping a Republican-held Senate seat.

But the race took an unexpected turn in recent weeks. Tillis, once a Trump critic who has increasingly allied himself with the president, tested positive for coronavirus after attending the Amy Coney Barrett nomination ceremony at the White House, taking him away from the campaign trail.

Cunningham, meanwhile, was caught in a sexting scandal, and was revealed to be having an affair.

So far the impact of both events has not appeared to move polls, though Cunningham’s sexual indiscretions were dominating Republican ads on local radio channels this week. “This tells me everything I need to know about Cal Cunningham’s character,” says Mary Stuart, a voter from Raleigh, in one ad by the Senate Leadership Fund, a committee which aims to protect the Republican majority in the Senate.

Also on the ballot will be elections for North Carolina’s House of Representatives and Senate. This year, the make-up of the state legislature – currently controlled by Republicans, though North Carolina has a Democratic governor – will be particularly important as it will be responsible for drawing election boundaries next year after the census is completed.

North Carolina is a state with a long history of racial injustice – the famous Greensboro sit-in at a lunch counter in 1960, which was one of the key moments in the Civil Rights Movement, took place in the North Carolina town. The state was recently found to have engaged in egregious gerrymandering along racial and partisan lines, with the result that a court ordered a redrawing of electoral boundaries. The new districts are in place for this election.

Boosting black voter participation is key to the Democrats’ election strategy in this swing state as they try to recreate the energy and enthusiasm that surrounded Barack Obama’s 2008 election win in North Carolina.

Biden visited Durham last Sunday for a drive-in rally, but operatives are also focusing on increasing turnout in urban areas like Charlotte and Greensboro. Vice-presidential candidate Kamala Harris campaigned in Charlotte on Wednesday.

With polls showing the race will go down to the wire, North Carolina will be a key state to watch on election night.

Sign up to get Suzanne Lynch's US Election Diary by email every weekday morning of the campaign at irishtimes.com/newsletters/us-elections