World update: Spanish PM says over 3m people may have had Covid-19 in Spain 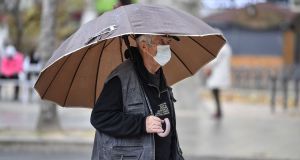 A man wearing a protective face mask as a measure against the spread of the Covid-19 pandemic. Photograph: Philippe Desmazes/AFP

Europe’s reported new coronavirus cases more than doubled in 10 days, crossing 200,000 daily infections for the first time on Thursday, according to a Reuters tally, with many southern European countries reporting their highest single-day cases this week.

Europe has so far reported about 7.8 million coronavirus cases in total and about 247,000 deaths, according to a Reuters tally.

Meanwhile, Italy’s health ministry said on Friday it had registered 19,143 new infections over the past 24 hours, its highest such daily tally since the start of the outbreak there.

Europe as a region is reporting more daily cases than India, Brazil and the US combined. The increase is partly explained by far more testing than was done in the first wave of the Covid-19 pandemic.

The global coronavirus tally stands at about 41.4 million cases and about 1.1 million deaths.

According to a Reuters tally, Wednesday saw the highest total of new infections reported in a single day across the world, at 422,835.

Wales’s firebreak is about “saving lives, not Christmas”, Welsh first minister Mark Drakeford said, hours before the country entered its two-week firebreak lockdown. Mr Drakeford warned that hundreds more people would die from coronavirus across Wales “unless we act now to bring this deadly disease under control”.

In western Europe, France, which is reporting the highest seven-day average of new cases in Europe with 25,480 infections per day, passed 1 million cases on Friday with a new record daily total of more than 42,000 new cases.

To slow the spread of infection, France’s prime minister Jean Castex on Thursday announced widening a coronavirus curfew to cover more than two-thirds of its population.

Another western European country, the Netherlands, reported more than 9,000 new cases in 24 hours, a new record, data released by the National Institute for Public Health (RIVM) on Thursday showed.

In Spain, which passed the 1 million case milestone earlier this week, two regions, Castilla and León and Valencia, urged the central government to impose night-time curfews.

Official data shows Spain already has the highest number of cases in Europe, but the real picture may be even worse, according to prime minister Pedro Sánchez, who said a nationwide antibody study suggested the total may be more than 3 million. “If we don’t follow precautions, we are putting the lives of those we love most at risk,” he said.

Germany, which reported more than 10,000 daily cases for the first time on Thursday, extended travel warnings for Switzerland, Ireland, Poland, most of Austria and Italian regions including Rome.

The Czech Republic has gone into a second lockdown to avert the “collapse” of its healthcare system.

Non-essential shops and services in the Czech Republic shut down on Thursday and people were urged to stay at home as much as possible, as officials there announced a record daily rise of 14,968 new Covid-19 cases.

The country of 10.7 million is now dealing with 124,040 confirmed active cases of Covid-19 – six times more than a month ago – prompting Czech prime minister Andrej Babis to scrap a pledge that there would be no return to lockdown.

Mr Babis has also moved to sack his health minister for holding a meeting in a restaurant closed under government restrictions.

In Belgium, foreign minister and deputy prime minister Sophie Wilmès (45) has been admitted to intensive care suffering from Covid-19 amid a surge in infections in the country.

Ms Wilmès was prime minister until three weeks ago, when she was succeeded by Alexander De Croo, and led Belgium throughout the year as it struggled with one of the world’s highest death tolls in the pandemic.

Meanwhile, Denmark is lowering the limit on public gatherings to 10 people from 50 and banning the sale of alcohol after 10pm.

Hospitals across Europe remain under strain. Even though they remain well below levels at the peak of the crisis six months ago in the region, Covid-19 hospital admissions and occupancy are going up again.

A World Health Organisation (WHO) expert said on Monday that Europe and North America should follow the example of Asian states by persevering with anti-Covid measures and quarantining anyone who comes into contact with infected people.

Elsewhere in the world, a senior official in Iran said it was planning new restrictions, such as state employees working every other day in the capital Tehran, after a record surge in cases on Friday.