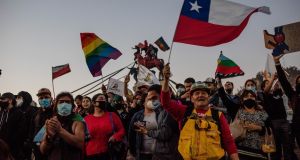 Voters in Chile have approved by an overwhelming majority a proposal to ditch the country’s Pinochet-era constitution in favour of a new charter to be drawn up by a citizens assembly.

Despite complications due to the coronavirus pandemic, turnout in Sunday’s referendum was the highest in years, with long lines of masked voters waiting to vote in the capital Santiago.

Final results showed a massive 78 per cent of votes cast backed a new constitution with just 21 per cent in favour of sticking with the current one.

The country’s politicians called the plebiscite in a bid to end mass protests that rocked the Andean nation a year ago, after a modest hike in fares on public transport became a lightening rod for latent frustration at entrenched social inequalities in what is one of Latin America’s richest societies.

Though it has been heavily amended since the return of democracy in 1990, the current constitution became a target for protesters who have never forgiven the fact it was imposed on the country during the murderous military dictatorship of Augusto Pinochet.

In Santiago, tens of thousands of people celebrated the result in Plaza Italia – the epicentre of last year’s protests – by letting off fireworks and chanting “rebirth”.

Voters also endorsed by an even larger majority excluding members of the country’s current legislature from the constitutional assembly that will be charged with drawing up the new document. The 155-member body will be elected in a special election next April.

The assembly will be made up of equal numbers of women and men and will also include members of the country’s marginalised indigenous communities.

It will have up to 12 months to write a new charter, which must be approved by two-thirds of its members in a requirement designed to ensure there is broad support for the document before it is put before the country for final approval in a compulsory election for all adults. It will only require a simple majority in favour or against the proposal.

President Sebastián Piñera welcomed Sunday’s referendum as a demonstration of Chileans’ “democratic nature”. But he warned the vote was only the beginning of the process. “Starting today we have to collaborate so that the new constitution will be the great seal of unity, stability and the future,” he said in a speech at the presidential palace.

His popularity already battered by last year’s unrest and his government’s missteps in tackling the coronavirus pandemic, Mr Piñera now risks becoming a lame-duck president with the last 14 months of his term likely to be overshadowed by the election for the constitutional assembly and its deliberations as well as the contest to succeed him.

Sunday also represented a stinging blow for his right-wing coalition, which had split on whether or not to back the referendum. Some defended the current constitution as the basis for the strong economic growth and sharp declines in poverty of recent decades that have made the country a stand-out performer in its region.

But many Chileans blame the charter for blocking greater progress in improving public education and healthcare, which fuelled a growing disillusionment with politics that exploded in last year’s protests.

Many of those who backed Sunday’s referendum say they will push to tilt the country’s constitutional arrangement away from its current preference for the private sector in favour of a greater emphasis on social rights.