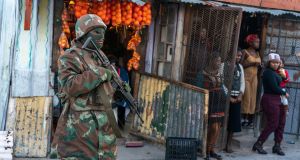 The South African government’s recent deployment of the army to an area of Cape Town where more than 1,000 gang-related murders have taken place since January has brought little comfort to local resident Zukiswa Qezo.

Although dispatched to help police stabilise the spiralling violence on the Cape Flats, a low-lying urban sprawl to the southeast of the Western Cape province’s capital, the troops’ presence in her neighbourhood fills the 47-year-old with dread.

“We do need help with the gangs here, but I’m very worried about soldiers patrolling RR section [an informal settlement in Khayelitsha township on the Cape Flats],” she says. “They are not trained to police civilians, they are trained to fight wars.”

The Cape Flats is not a war zone, but the gang-related violence has become so extreme there in recent months that the authorities have conceded the city faces a gang violence crisis of unprecedented proportions.

In early July the Western Cape’s community safety executive, Albert Fritz, told reporters the death toll from gang violence in the area for the first six months of 2019 was the worst in the city’s history.

In total, he said, more than 900 gang-related murders had occurred by the end of June, bringing the area’s total number of murders to 1,600 for that period.

Qezo says she cannot leave her home at night for fear of being robbed, raped or caught in the crossfire of impromptu gun battles that erupt between the local gangs fighting to control the area, its drug trade and other illegal activities.

“The police are afraid to patrol here because they are vulnerable,” she says. “The street lighting is poor, and they do not have enough resources or manpower to patrol safely.”

On July 18th the deployment of 1,300 troops began, and the soldiers are expected to stay on the streets of 10 identified hot spots for three months, carrying out community patrols and backing up the police’s anti-gang operations.

To date the authorities have made 1,004 gang-related arrests, including of 806 wanted suspects, official statistics show. However, the murder rate in the metro has remained stubbornly high, with another 159 homicides recorded by forensic services in the month since the troops started patrolling.

The Western Cape’s new premier, Alan Winde, said on August 12th he would be seeking a full report from police on the role and effectiveness of the army since its deployment. “As the provincial leadership, we will continue to fight for more police resources through our intergovernmental dispute [mechanism], while providing additional support where possible,” he said.

For years the Western Cape, which is run by the main opposition Democratic Alliance party, has been locked in a political battle with the African National Congress-led national government over the allocation of police resources to the nine provinces.

Fritz argues the Western Cape is “dramatically under-resourced compared to other provinces”, as it has an officer-to-civilian ratio of one to 509. South Africa’s minister of police, Bheki Cele, told parliament in mid-July there was one police officer for every 383 people in South Africa, while the desired ratio is one to 200. Nationwide there is a shortfall of 60,000 officers, he said.

Dalli Weyers of the Social Justice Coalition, a Khayelitsha-based movement that seeks to advance the rights of the poor, believes there are factors contributing to the crime crisis in addition to a lack of resources and poor policing strategies and leadership.

For instance, elements of the spatial segregation policy employed by the apartheid regime in Cape Town “are still at play” on the Cape Flats, he says.

Under apartheid the Cape Flats became a ghetto for black and mixed-race families forced out of their inner-city neighbourhoods by the authorities to make way for white people. With little infrastructure or services provided for the communities on the Cape Flats, and few local job opportunities for their residents, the area became fertile ground for gangsterism and crime.

Weyer points out that these communities remain marginalised under the same circumstances today. “The city has left these neighbourhoods without proper services like adequate street lights and safe toilet facilities, while it ensures richer, predominately white areas get the resources they need,” he says.

However, city officials counter this by arguing the violence is the root cause of many of the socio-economic problems the gangland hot spots face, such as poor service delivery, rather than the other way around.

In terms of the actual increase in murders, Weyer says the spike was attributable to a surge in killings in the black areas rather than in the mixed-race communities, where the gang culture is more associated with turf wars, local extortion rackets and protecting drug markets.

“In the black communities, crime is linked to large, organised syndicates that are involved in things like hijacking commercial goods trucks, blowing up ATMs and smuggling cigarettes from abroad,” he says.

Feeding into the increase in violence, Weyer adds, is the fact that thousands of guns confiscated by police officers over the last decade keep ending up back in gangsters’ hands via corrupt members of the force.

One officer alone, a former colonel in the Cape Town police who was sentenced to prison in 2016 for fraud and racketeering, has admitted to selling back to criminals more than 2,000 guns confiscated by the authorities.

While neither the national nor provincial governments appear willing to take responsibility for the gang warfare and its recent escalation, an equality court ruling in December 2018 suggests the South African Police Service’s resource allocation system is partly to blame.

On December 14th the court ruled the system discriminates based on race and poverty in the Western Cape. While the Social Justice Coalition sees the ruling as a victory, an effective remedy has yet to be determined by the court, says Weyer.

“Within this vacuum the crime rate has soared. We don’t believe the [police service] resource allocation formula was designed to discriminate against the poor, but that is what is happening, and it needs to be addressed,” he says.

1 All students will not return to school even if social distancing rules are relaxed – McHugh
2 Emily Maitlis thanks BBC viewers for support after Cummings row
3 ‘Stick to the guidelines’ - People warned not to gather in crowds as sunny weekend approaches
4 Church closes its doors after flouting public health rules
5 The human cost of Covid-19: Ireland's care homes with the most deaths revealed
Real news has value SUBSCRIBE