Two US congresswomen denied entry to Israel after Trump plea 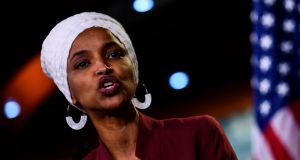 Israel barred two Democratic congresswomen from visiting the country in a move that has prompted widespread criticism from Democrats and Jewish groups in the United States.

Palestinian-American Rashida Tlaib and Minnesota congresswoman Ihlan Omar, who is originally from Somalia, were due to travel to Israel with a delegation on Sunday. But Israel announced yesterday that they will not be permitted to travel. Under Israeli law, the government can deny visas to foreign nationals who publicly call for any kind of boycott of Israel.

The decision to deny the two members of Congress visas was announced shortly after US President Donald Trump urged Israeli prime minister Binyamin Netanyahu to stop them entering the country, arguing that they “hate Israel & all Jewish people.”

“It would show great weakness if Israel allowed Rep Omar and Rep Tlaib to visit,” he wrote.

“They hate Israel & all Jewish people, & there is nothing that can be said or done to change their minds. Minnesota and Michigan will have a hard time putting them back in office. They are a disgrace!” he said, referring to the states that elected them to Congress in 2018.

The president intensified his comments after the decision was announced, writing: “Representatives Omar and Tlaib are the face of the Democrat Party, and they HATE Israel!

Mr Trump targeted the two women last month when he controversially told them, and two of their colleagues to “go back” to their countries. All four are American citizens.

It would show great weakness if Israel allowed Rep. Omar and Rep.Tlaib to visit. They hate Israel & all Jewish people, & there is nothing that can be said or done to change their minds. Minnesota and Michigan will have a hard time putting them back in office. They are a disgrace!

The decision to stop the congresswomen from travelling was unexpected, as the Israeli government had signed that it was reluctant to deny visas to two sitting members of Congress, amid concern that it could hurt US-Israeli relations.

Last month, Israeli ambassador Ron Dermer said the two congresswomen would be allowed to visit Israel “out of respect for the US Congress and the great alliance between Israel and America”.

But throughout this week there were signs that Mr Netanyahu, who faces elections next month, was reconsidering the stance.

Responding to the decision, Mr Omar described it as an “affront”, accusing Israel of implementing Mr Trump’s Muslim ban. “Denying entry into Israel not only limits our ability to learn from Israelis, but also the Palestinian territories,” she said.

“Israel’s denial of entry to congresswomen Tlaib and Omar is a sign of weakness and beneath the dignity of the great state of Israel,” she said.

Steny Hoyer, the House majority leader who led a 40-strong delegation to Israel as recently as last weekend, branded the decision “outrageous.”

“This action is contrary to the statement and assurances to me by Israel’s ambassador to the United States that ‘out of respect for the US Congress and the great alliance between Israel and America, we would not deny entry to any member of Congress into Israel,” he said in a statement.

This criticism was also echoed by Jewish groups in the United States.

The American Israel Public Affairs Committee, a highly influential pro-Israel group in the US, also appeared to break with Mr Netanyahu.

“We disagree with Reps Omar and Tlaib’s support for the anti-Israel and anti-peace BDS movement, along with Rep Tlaib’s calls for a one-state solution. We also believe every member of Congress should be able to visit and experience our democratic ally Israel first hand,” the association posted on Twitter.

The Jewish Democratic Council of America argued that the ban “plays into President Trump’s goal of politicising support for Israel”.

“As strong supporters of Israel and of the US-Israel relationship, we urge the government of Israel to reject President Trump’s unprecedented and ill-advised recommendation to deny congresswomen Ilhan Omar and Rashida Tlaib entry into Israel,” the organisation said in a statement.