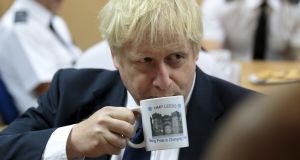 Irish politicians have said a leaked report setting out British preparations for a hard Border in the event of a no-deal Brexit comes as no surprise.

The documents, published by the Sunday Times, warn that the UK will be hit with a three-month “meltdown” at ports, a hard Irish border and shortages of food and medicine if it leaves the EU without a deal.

The paper said the documents compiled this month by the Cabinet Office under the codename Operation Yellowhammer was marked “official-sensitive” requiring security clearance on a “need to know” basis.

The documents said the UK government expects the return of a hard Border in Ireland as current plans to avoid widespread checks will prove “unsustainable” and this may spark protests, road blockages and “direct action”.

It also says logjams caused by months of border delays could “affect fuel distribution” in the UK, that up to 85 per cent of lorries using the main Channel crossings “may not be ready” for French customs and could face delays of up to 2½ days; and the availability of fresh food would be reduced and prices would rise.

According to the documents, petrol import tariffs would also “inadvertently” lead to the closure of two oil refineries, while protests across the UK could “require significant amounts of police resources” in a no-deal scenario.

A senior Whitehall source told the paper: “This is not Project Fear - this is the most realistic assessment of what the public face with no deal. These are likely, basic, reasonable scenarios - not the worst case.”

Responding to the report, Sinn Féin’s deputy leader Michelle O’Neill said Ireland as a whole had been voicing these concerns for months.

“These reports are no surprise to those of us on this side of the Irish Sea who have been voicing our very real concerns on the consequences of a no-deal Brexit for a considerable period of time directly with the British Government and the European Commission,” she said.

“The island of Ireland faces its biggest and most profound challenges in a generation as the threat of a no-deal Brexit becomes a growing reality in the immediate time ahead.

“The British Government continues to purposely ignore the cross-community majority of citizens in the North of Ireland and elected Assembly members who vehemently disagree and voted to oppose this unwanted Brexit during the referendum in 2016.

“The consequences of a no-deal Brexit will result in a hard border which threatens our hard-won peace and undermines the political and economic progress of the past 21 years enjoyed across the whole island, but particularly in border communities which have been transformed.

“It will have devastating effects for the island of Ireland and our people, businesses, farmers, workers and communities.

“Staying within the single market and customs union, safeguarding the Good Friday Agreement, protecting business, jobs and the all-island economy and citizen’s rights remains paramount for the majority of the people of the North and across Ireland.

“The British Government is dealing with the North of Ireland and the peace process as though it’s a commodity and it is a reckless, dangerous approach to take and one which must be opposed by the EU27, US Congress and those who value the progress of the past 21 years in Ireland.”

Fianna Fáil noted the severe impact no deal would have on Ireland’s economy. Its Brexit spokeswoman Lisa Chambers said: “This leaked document merely backs up all of the warnings that Ireland has been outlining about the fallout from a no-deal Brexit.

“Let me be clear, a no-deal Brexit would be catastrophic for the island of Ireland - this document catalogues a sector-by-sector impact on the UK, but there will also be huge implications for these areas in Ireland.

“Given the make-up of the North’s economy, structured around the SME and agri-food sector, and the very tight supply chains linking North-South and East-West, the effects of a no-deal Brexit would be severe and damaging.”

SDLP Leader Colum Eastwood said the British Prime Minister Boris Johnson does not understand the situation in Northern Ireland. “Boris Johnson and his plans for a no-deal Brexit on October 31st are a threat to stability and prosperity on this island,” he said.

“Following our meeting earlier this month, SDLP concerns that Johnson does not fully understand the complexities and fragilities of relationships in Ireland were confirmed.

“The details in this leaked document now confirm that he doesn’t care either. We know that a no-deal Brexit will result in food and medicine shortages. Now, by the British Government’s own admission, we know that trade across the border will grind to a halt.

“This British Government has no mandate for a no-deal Brexit. If they refuse to reverse position then they should call a general election and put it to the people.

The British Government sought to play down the documents however on Sunday.

Business Minister Kwasi Kwarteng said a “lot of people” were playing into “Project Fear” following the leak of documents which detailed the “most likely aftershocks” of the UK crashing out of the EU.

When asked about the dossier, Mr Kwarteng told Sky’s Sophy Ridge on Sunday: “I think there is a lot of scaremongering around and a lot of people are playing into Project Fear and all the rest of it.

“We’ve got to prepare for no-deal ... now we’ve got a new Prime Minister who is very much focused on that and the scale and intensity of those preparations are increasing and we will be fully prepared to leave without a deal on October 31.”

However, Michael Gove - the Cabinet minister responsible for no-deal planning - insisted Yellowhammer represented a “worst-case scenario”, and a Downing Street source claimed it had been leaked by a former minister.

Mr Gove tweeted: “We don’t normally comment on leaks - but a few facts - Yellowhammer is a worst case scenario - v significant steps have been taken in the last 3 weeks to accelerate Brexit planning - and Black Swan is not an HMG doc but a film about a ballet dancer...”

A Number 10 source said: “This document is from when ministers were blocking what needed to be done to get ready to leave and the funds were not available. It has been deliberately leaked by a former minister in an attempt to influence discussions with EU leaders.

“Those obstructing preparation are no longer in Government, £2 billion of extra funding already made available and Whitehall has been stood up to actually do the work through the daily ministerial meetings. The entire posture of Government has changed.”

The Government of Gibraltar said the Operation Yellowhammer documents were “out of date” and based on “planning for worst case scenarios”.

Fabian Picardo, the chief minister of Gibraltar, said: “We do not want a no-deal Brexit. We think it is bad for Gibraltar. We are, nonetheless, now ready for it. The matters raised in the outdated Yellowhammer leak have already been responsibly addressed in detail.”

Meanwhile Boris Johnson will tell Angela Merkel and Emmanuel Macron that there must be a new Brexit deal when he makes his first trip abroad as prime minister.

Mr Johnson will make clear to the French president and German chancellor that Britain will leave the European Union on October 31st with or without a deal.

The prime minister, who is heading to Berlin on Wednesday and Paris on Thursday, is expected to say that Parliament will not and cannot cancel the outcome of the EU referendum.

He will insist there must be a new deal to replace Theresa May’s thrice-defeated Withdrawal Agreement if Britain is to leave with a settlement on October 31st.

Speaking at the Fleadh Ceoil in Drogheda on Saturday, Taoiseach Leo Varadkar said he was due to speak to Mr Johnson in coming days.

“Certainly I’ll be interested to know from him if the withdrawal agreement isn’t something he believes he can accept and how the UK will honour the commitments they made to Ireland and the EU back in 2017.”

Asked whether he expects Borris’ position to shift, the Taoiseach said: “I’ll have to talk to him but what I expect between now and October 31st is there’ll be many twists and turns. But we’ll see how it goes.”

Details of the PM’s travel plans emerged as Labour leader Jeremy Corbyn reiterated his call for MPs to work together to prevent a no-deal Brexit.

Mr Corbyn, who set out his plan to be installed as a caretaker prime minister last week to stop the UK crashing out of the EU without a deal, said his proposal is the “most democratic way” to prevent a no-deal.

He told the Observer: “My message to MPs across Parliament is simple and urgent: only by working together can we stop no-deal.

“Three years after the EU referendum, the country stands at a precipice. Boris Johnson has become Prime Minister without any popular mandate. He has no right to drive our country off a cliff and into the arms of Donald Trump with his no-deal fixation.

“The plan I set out this week is the simplest and most democratic way to stop no-deal. We have to seize the opportunity before it’s too late, so the people, rather than an unelected Prime Minister, can decide our country’s future.”

The Liberal Democrats and senior Tories have rejected his proposal, however it won the potential backing of the SNP, Plaid Cymru and Tory MP Guto Bebb.