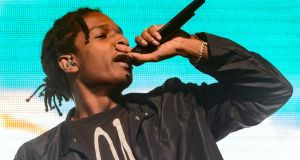 Rakim Mayers, aka A$AP Rocky: had pleaded not guilty, along with two others, to the charges. Photograph: Laurent Gillieron/EPA

US rapper A$AP Rocky was convicted in Sweden on Wednesday of assault over a Stockholm street brawl, but spared time in jail after a high-profile trial that had led US president Donald Trump to accuse Sweden of treating him unfairly.

A$AP Rocky, whose real name is Rakim Mayers, and two members of his entourage were found guilty of kicking and beating 19-year-old Mustafa Jafari after an argument. But the court said allegations they hit him with a glass bottle, which might have brought a tougher sentence, were not proven.

“In an overall assessment, the court finds that the assault has not been of such a serious nature that a prison sentence must be chosen,” senior judge Per Lennerbrant told a courtroom packed with reporters.

The rapper, who shot to fame with his 2011 debut “Live.Love.A$AP”, was not in court for the verdict. He was released on August 2nd after 31 days in jail and a three-day trial, in what legal experts said at the time was a sign the judge was likely not to jail him further.

The court said the fact that the defendants had no prior convictions over the past five years and had already spent time in custody awaiting trial meant they would not serve further time in prison or pay any fine.

Prosecutor Daniel Suneson said he had not yet decided whether he would appeal any part of the verdict.

“The court has been of the same view as myself, with one big exception, which is whether or not a blow was dealt with a glass bottle,” he said. “Beyond that I feel the court made an accurate assessment.”

Slobodan Jovicic, Mayers’s Swedish lawyer, told reporters he was disappointed in the conviction but said the court had ruled in favour of his client regarding some aspects of the case.

“We didn’t succeed all the way but on the other hand we got many points proven,” he said.

The case drew global attention, particularly after Mr Trump offered to vouch for the rapper’s bail and asked Swedish prime minister Stefan Lofven to help free him. Sweden does not have a bail system and Mr Lofven pointed to Sweden’s independent judiciary, saying he could not intervene.

Other celebrities, including Kim Kardashian and Rod Stewart, had also spoken out in support of the rapper.

During the trial, both the defence and prosecution made liberal use of video taken on mobile phones during the altercation. The prosecution said that after an argument, Mayers threw Mr Jafari to the ground, after which he and the two others kicked and punched the teenager.

Mayers said he acted in self defence after the teenager attacked his bodyguard.

The court said it had been proven that the artist and two of his party had hit and kicked the plaintiff as he lay on the ground, and discounted their claims of self-defence.

Mayers, best known for his song Praise the Lord, had been in Stockholm for a concert at the time of the fight. He had to cancel several shows across Europe due to his detention.

He is due in neighbouring Finland on August 16th to play the Blockfest festival in Tampere. – Reuters