Trump stalls sanctions against China amid fears for US economy 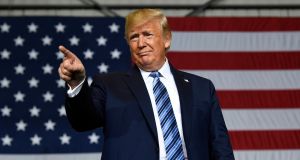 The Trump administration delayed wide-ranging sanctions on Chinese imports on Tuesday in a sign of growing concern in Washington about the US economy.

In an unusual move, US trade representative Robert Lighthizer announced that a 10 per cent tariff on some Chinese goods, which had been scheduled to begin on September 1st, would be delayed until December 15th.

The trade office announced that tariffs on Chinese cellphones, laptop computers, video game consoles and certain categories of clothes and footwear, would be delayed by more than 10 weeks.

Markets were instantly buoyed as news of the reverse-turn emerged, with the Dow Jones Industrial average rising by 2 per cent.

Speaking to reporters as he left his golf club in New Jersey for an event in western Pennsylvania, President Donald Trump confirmed the move had been taken to help cushion American consumers from higher costs in the run-up to Christmas.

“What we’ve done is we’ve delayed it so they won’t be relevant in the Christmas shopping season, just in case they might have an impact on people,” he said.

This tactic was borne out on Wall Street, where the share price of consumer and retail brands like Macys, Apple and Best Buy jumped considerably.

Markets have been spooked of late by signs of deepening trade tensions between the US and China.

Talks between the two sides last month ended without agreement, prompting Mr Trump to announce a fresh set of tariffs to go into effect on September 1st in addition to a 25 per cent levy already in place on $250 billion worth of Chinese imports.

But the reversal on Tuesday hints at wider concern about the impact of the tariffs on US consumers and the American economy.

Last month, the Federal Reserve announced its first interest rate cut since before the financial crisis, citing concerns about trade policy. The Fed may move to cut rates further at its next meeting, according to some analysts. Tensions between the two countries were also exacerbated last week when the US branded China a currency manipulator after Beijing allowed its currency to fall below a key threshold against the dollar.

The president took to Twitter shortly before the announcement and accused China of not buying enough American goods. “As usual, China said they were going to be buying ‘big’ from our great American Farmers. So far they have not done what they said. Maybe this will be different!” he tweeted.

But he suggested that there were some grounds for optimism in terms of negotiations between the two sides, claiming that a phonecall between Chinese and US officials ahead of the announcement had been “very productive”. He also told reporters he believed China would “really like to make a deal” as he touted the strength of the US economy,

“We’ve never been better. The stock market is way up today,” he said, as he criticised other countries for keeping their currencies weak.

Later, at a factory event in Pennsylvania, Mr Trump highlighted what he said was the positive impact of tariffs on the steel industry. “Steel was dead,” he said. “And now, your business is thriving . . . The steel companies are thriving again.”

The US president also said that local union members should tell their leaders to support him in the presidential campaign.

“And if they don’t, vote them the hell out of office,” he said.

Praising Pennsylvania’s economic performance, he said: “This would have never happened without me.”

The president also criticised the media. “Can you imagine if I had a fair press? Could you imagine if these people treated me fairly?” he asked. “You want to really drive them crazy, go to hashtag-third-term” or “hashtag-fourth-term” he added, referring to a third or fourth presidential term which is prohibited in the US political system.