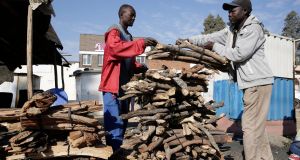 Millions of people in Zimbabwe are on the verge of “starvation”, according to the United Nations, which is seeking $331.5 million (€295 million) in aid to avert a humanitarian disaster being brought on by drought and a recent cyclone.

Speaking at the launch of a joint appeal with the Zimbabwean government in Harare on Tuesday, David Beasley, executive director of the UN’s World Food Programme, said at least 2.3 million rural Zimbabweans needed emergency food aid immediately, and that figure would increase to 5.5 million by March next year.

“We are talking about people who truly are marching towards starvation if we are not here to help them,” he said. “We are facing a drought unlike any that we have seen in a long time.”

The UN had earlier appealed for $294 million for the southern African country, but it says more funding is now needed as the impact of the drought has spread.

Zimbabwe’s government has estimated that a further 2.2 million people in urban areas will shortly require food aid, bringing the total in need of help to 7.7 million – nearly half of the country’s 16.5 million population.

Tuesday’s appeal also targeted the humanitarian needs of those who were affected by Cyclone Idai, a massive tropical storm that swept through parts of eastern Zimbabwe in March after first decimating large areas of Mozambique and Malawi.

This year’s drought, which has been attributed to the affects of El Nino, has halved the harvests of staple crops such as maize, says the government.

It has also reduced water levels at the country’s main hydroelectric dam on Lake Kariba, cutting its power generation capacity to the point that citizens and industry frequently endure blackouts that last up to 18 hours.

Exacerbating the situation, Zimbabwe is in the midst of its worst economic crisis in a decade, which is characterised by massive unemployment, the collapse of local business sectors and spiralling inflation.

Supplies of essentials such as cooking oil, medicine and petrol frequently run out across the country.

The country’s inflation rate hit 176 per cent in June, according to official figures, making it the highest since hyperinflation forced the government to abandon its own currency in 2009 in favour of the US dollar.

The removal of the dictatorial Robert Mugabe as the country’s president in 2017 in a coup was met with hope by many Zimbabweans.

But his successor, Emmerson Mnangagwa, has been unable to revive the economy or usher in meaningful political reforms.

In addition, the main opposition Movement for Democratic Change (MDC) accuses the ruling Zanu-PF party of stealing the 2018 general election, which has led to a political stand-off between the two that is undermining efforts to attract much-needed investment into the country.

On Monday, the MDC informed the government it is planning street demonstrations for August 16th to protest against its handling of the deteriorating economy, corruption, unemployment, and power and fuel shortages.