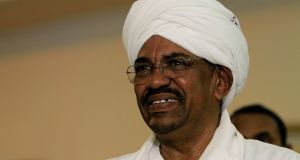 Sudan’s former president President Omar al-Bashir: He was the poster boy for those who dismissed the International Criminal Court as a relic of western colonialism. Photograph: Ashraf Shazly/AFP via Getty Images

If the decision by Sudan to hand former president Omar al-Bashir over to the International Criminal Court (ICC) for a long, high-profile trial seems more than a little unlikely, it’s worth noting what the transitional government in Khartoum aims to negotiate in return.

Because although justice certainly brings its own reward, and nobody would openly admit that Bashir – on the run from the ICC for more than a decade – is being used as a bargaining chip in a high-stakes game of geopolitical diplomacy, that is, in actual fact, the harsh reality.

Prime minister Abdalla Hamdok has repeatedly called for Sudan to be allowed to reintegrate fully into the international community after Bashir’s 30-year dictatorship, which was marked by bloody civil war, literally countless deaths, and institutionalised human rights abuses.

But what that really means is that the new administration wants Sudan removed from America’s list of state sponsors of terrorism – a pariah status that is blocking badly needed international financial assistance without which rebuilding the country is an all-but-hopeless prospect.

However, as one US official put it about Sudan’s return to legitimacy: “It’s not like flipping a light switch.” It’s a process. It involves give and take, part of which is shipping Omar al-Bashir – conveniently jailed in December for two years for corruption – off to The Hague to meet his fate.

It’s also important in international diplomacy that everyone’s a winner – or at least appears to be.

And so, ironically, if the “transfer” of Bashir actually takes place, it could be an important step in rehabilitating the ICC itself after years during which he was the poster boy for those who dismissed it as a relic of western colonialism bent on “hunting Africans”, as the African Union once described it.

Despite two international arrest warrants and a travel ban, Bashir – the first sitting president to be indicted by the ICC – made free-and-easy visits to China, Egypt, Nigeria, Ethiopia, Kenya, Chad, Qatar, the United Arab Emirates, Saudi Arabia and South Africa, all of which failed to arrest him.

He even met Vladimir Putin for a summit in the Black Sea resort of Sochi where he not alone rubbed the ICC’s nose in his impunity but appealed to Putin for protection against the US and enthusiastically offered Sudan as Russia’s strategic gateway to Africa.

So there’s some ground to be regained between Khartoum and Washington.

That global indifference, much of it on the part of signatories to the Rome Statute that set up the court – combined with the collapse of the case against another sitting African president, Uhuru Kenyatta of Kenya – left the ICC looking shockingly ineffectual and only marginally relevant.

So bitter an issue did Bashir’s freedom become that ICC prosecutor Fatou Bensouda, in her regular briefing to the UN Security Council, warned scathingly that unless member states took action, “I will have little or nothing to report to you on this case for the foreseeable future”.

Is all this about to change? There’s some well-founded scepticism among those who have watched the Bashir saga for years. A statement from the International Federation for Human Rights, for instance, was optimistic but noticeably bedded in caveats.

It pointed out that, as of Wednesday, not a single one of the six longstanding ICC arrest warrants for five suspects, including Bashir, had been executed by the transitional government since it came to power last August.

In terms of realpolitik, that simply confirms that the best hope of seeing Omar al-Bashir in the ICC dock lies not in a sudden Damascene conversion in Khartoum to the idea justice for the former president, but in hard-headed bargaining to bring Sudan and its people in from the cold.