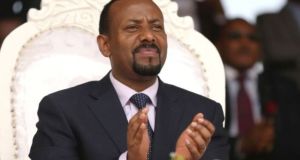 Ethiopian prime minister Abiy Ahmed has won this year’s Nobel Peace Prize for his role in ending a 20-year conflict between his country and neighbouring Eritrea.

The Norwegian Nobel committee praised “his efforts to achieve peace and international co-operation, and in particular ... his decisive initiative to resolve the border conflict with neighbouring Eritrea”.

Following a historic peace deal in July last year, the conflict that had defied mediation efforts for two decades was suddenly resolved. Borders were reopened, diplomatic ties restored and families separated by the war for a generation were reunited.

“What has been achieved in terms of normalising relations between the two countries is enormous” said Awol Allo, an Ethiopian professor of human rights. “I can’t really think of anything more important for families that were splintered as a result of that senseless war to suddenly have that hope, that opportunity.”

Appointed in April 2018, the 43-year-old prime minister inherited a country reeling from 25 years of authoritarian government and months of public protests. Immediately, the young leader promised sweeping reforms intended to deliver peace at home and abroad.

In his first six months in office, in addition to securing peace with Eritrea, he released journalists and political prisoners in Ethiopia, welcomed home exiled dissidents and unbanned opposition groups. He later sought to be a peacemaker in the region, mediating between Eritrea and neighbouring Djibouti and intervening in Sudan, following the ousting of dictator Omar al Bashir in April.

In some quarters, his personal style – a preference for working directly rather than through the institutions of state – has provoked criticism. Others argue that intractable problems require decisive, individual action.

“Without a doubt the reconciliation [with Eritrea] happened and was successful because of his personal initiative. Some of these things need people like him” said Zemedeneh Negatu, an Ethiopian investor.

Mr Negatu said the recognition of the Nobel Prize would give Mr Abiy the stature he needed to pursue peace initiatives across the continent, while also providing foreign investors with further confidence of his ability to deliver on ambitious economic reforms at home.

“From the perspective of Ethiopia’s continued economic transformation this is also a huge leg-up,” he said. “It is an affirmation of what we’ve been seeing up close and personal, and now the world is going to see.”

Economically, Mr Abiy has promised to open many parts of Ethiopia’s state-led economy, east Africa’s largest, to foreign investment for the first time.

But his domestic record is not unblemished. His political reforms have seen a rise in intercommunity violence across the country of 105 million people as Ethiopia’s 80-odd ethno-linguistic groups have adjusted to new freedoms of expression and mobilisation.

In total, more than 2.9 milion people had been displaced by violence by the end of last year, according to international estimates.

“No doubt some people will think that this year’s prize is being awarded too early,” said Berit Reiss-Andersen, chair of the Nobel committee, noting the social and political challenges the country still faces. “The Norwegian Nobel Committee believes it is now that Abiy Ahmed’s efforts deserve recognition and need encouragement.”

Jan Egeland, secretary-general of the Norwegian Refugee Council, which supports displaced people in both Ethiopia and Eritrea, on Friday called on Mr Abiy to use the award to resolve the tensions within his own country. Mr Abiy “must continue to be brave and work to resolve ethnic tensions through peaceful means and bring to an end the misery and suffering of millions of displaced people”, he said.

Mr Awol said he believed Mr Abiy’s desire for peace was absolute and that the prize would only strengthen the administration’s resolve.

The Nobel Peace Prize has courted controversy in recent years with its awards for former US president Barack Obama and the EU. But the Norwegian committee, under the chair of lawyer and former centre-left politician Ms Reiss-Andersen, last year gave a well-received double award to Iraqi human rights activist Nadia Murad and Congolese surgeon Denis Mukwege for their efforts to end sexual violence in war. – Copyright The Financial Times Limited 2019