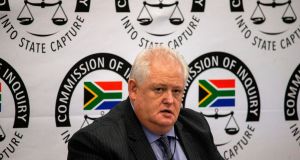 Whistleblower Angelo Agrizzi: All of those accused of corruption by him have denied any wrongdoing. Photograph: Wikus de Wet/AFP

Police are investigating the death in a car crash of a business leader who was implicated in a massive public sector corruption scandal in South Africa involving senior ruling party officials.

Gavin Watson, the chief executive of logistics firm African Global Operations, died on Monday after he crashed his car into a concrete pillar near OR Tambo International Airport in Johannesburg, just a day before he was to be questioned at a tax inquiry looking into his affairs.

In January, Mr Watson (71) was accused at a separate inquiry into public sector corruption of running the logistics company – which until recently was called Bosasa – as a criminal enterprise that made the equivalent of more than €100 million through illegally acquired government tenders.

The tax inquiry that Mr Watson was scheduled to appear at on Tuesday was established as a result of the explosive evidence Mr Agrizzi gave to the ongoing Commission of Inquiry into State Capture, Corruption and Fraud in the Public Sector over 10 days.

In addition, Mr Watson had been linked to a 500,000-rand (€31,000) donation made to President Cyril Ramaphosa’s ANC election campaign in 2017, which South Africa’s leader has denied knowing anything about.

All of those who were accused of corruption by Mr Agrizzi have denied any wrongdoing, including Mr Watson, who became a well-known anti-apartheid activist in the 1970s after his family defied racial segregation laws by playing in mixed-race rugby games.

A spokesman for the Watson family and African Global Operations, Papa Leshabane, said the family had not ruled out foul play in his death. The family has hired an accident reconstruction expert to investigate the car crash. Police said they had opened a case of culpable homicide, but there was no evidence at this stage of foul play.

The opposition Democratic Alliance has called for a “thorough and transparent” investigation into Mr Watson’s death given the implications it has for the work of the public sector corruption inquiry. A postmortem on Mr Watson’s body was due to be carried out on Tuesday.