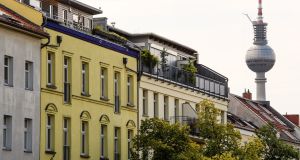 Berlin’s ruling city-state coalition is up in arms over a left-field proposal by its housing minister to cap almost almost half the residential rents in the city.

Amid a growing housing crisis in the German capital, Katrin Lompscher of the Left Party has circulated draft proposals that would limit basic rent of apartments built before 2014 to €7.97 per square metre.

That could see average rent for a 100sq m turn-of-the-century apartment – in even Berlin’s most desirable neighbourhoods – more than halved to a maximum of €800 a month. Other apartments, depending on age and location, could see rents as low as €3.42 per square metre. According to one report, half of the city’s renters would be affected by the draft proposal.

“We want to set down a stop sign against speculation, for affordable rents and a social city,” said Ms Lompscher.

Her Left Party colleagues have cheered the proposed intervention, and called for similar measures to be introduced across Germany. In Berlin average rents have more than doubled since 2011 – a massive shock to a local population used to low-cost living during the Cold War era and subsequent decades.

The rent cap proposal has unsettled listed German housing companies such as Deutsche Wohnen and Vonovia. They already face calls for expropriation in a grassroots Berlin campaign, and news of the €7.97 cap idea saw their shares drop by as much as 5 per cent on the Frankfurt stock exchange.

“A rent cap law would be going in the wrong direction and in no way solve the problem for tenants in Berlin,” said Vonovia in a statement.

Property lobby groups accuse politicians of attempting to distract from their failure in dealing with Berlin’s housing crisis: an environment where the population is exploding but too few new apartments are being built.

Andreas Mattner, president of the German Property Federation (ZIA), criticised the plans as “an attack on the industry and all owners”.

Ahead of threatened legal challenges, many landlords have said they will postpone or redirect cash earmarked for renovation of their Berlin properties to other regions in Germany.

The proposed cap is part of a wider Berlin package announced last month to freeze rents for five years for 1.6 million apartments.

The regulation was the first of its kind in Germany and is intended to provide tenants in the capital with a “breathing space”, the Berlin city-state government says.

Opinion is divided on the legality of the measures. Landlords – and the legal service of the Bundestag – have doubted they will survive a court challenge. Other experts suggest the five-year rent freeze may be legal if the Berlin state government can show it is a temporary measure to ease the housing crisis.

But the latest proposed cap has divided the Berlin coalition and been dismissed as a planned economy pipe dream by the Left Party’s allies: the Social Democratic Party (SPD) and Greens.

Michael Müller, Berlin’s governing SPD mayor, said: “For me it’s important that tenants can depend on a legally sound rent cap.”