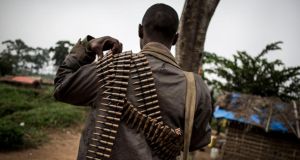 A soldier from the Armed Forces of the Democratic Republic of the Congo is seen in their military base outside Oicha in October, 2018. Photograph: John Wessels/AFP via Getty

Dozens of civilians have been brutally murdered in eastern Democratic Republic of the Congo during an attack by a rebel group that may have links to Islamic State.

The killings took place on Tuesday in Manzingi, in DRC’s Beni region. It is believed to have been carried out by the Allied Democratic Forces (ADF), a militant group founded in Uganda in the 1990s which has been responsible for the deaths of more than 1,000 civilians since 2014.

“It’s a very active rebel movement,” said Nelleke van de Walle, the deputy project director for Central Africa at the Crisis Group. “They target civilians in a very blunt way, they use machetes, knives, they have a very brutal way of killing the civilians and they don’t differentiate. They kill women, children, men.”

The recent increase in attacks was a response to a government offensive which began last year, Van de Walle said. “Any time the FRDC [Congolese army] tries to attack the ADF they retaliate against the local population in order to show they are a force to be reckoned with.”

The ADF is known as an organisation with an Islamic basis, with Mr van de Walle saying they even have a flag similar to that used by Islamic State. However, while Islamic State claimed responsibility for ADF attacks last year, in December a UN group of experts said they could find no evidence of a link between the two.

Last June, The Irish Times interviewed a former ADF child soldier in a transit centre in Goma, eastern DRC. He who said his family converted to Islam and moved from neighbouring Uganda to the DRC when he was very young.

Along with other children, he said he was trained to fight and was eventually shot in the leg while attacking a military base. This led to the boy being caught and brought to safety.

Locals in Beni, a region which has also been affected by the latest Ebola outbreak, have accused both the Congolese army and UN peacekeepers of failing to do enough to protect them.

“The recent attacks are only deepening the gap between the population and the army,” said Marcel-Héritier Kapitene, an activist from Beni.

“When a war becomes economically profitable, it ends with difficulty. But people die. Are we waiting to hear the cry of the last survivor of Beni to act? Beni is emptying. Beni is burning. The international community must act now.”

Meanwhile, Mr van de Walle would like to see a more “intelligence-based approach” used to combat the group.

“Going to the communities, talking to people, finding out who is aligned with the ADF, finding out what drives the movement rather than fighting them militarily,” she said.