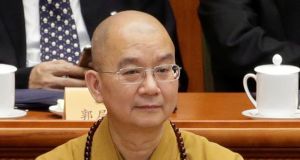 Shi Xuecheng, one of China’s leading relgious figures, has been accused of sexual harrasment and sexual misconduct by nuns of the Longquan Monastery. Photograph: Jason Lee/ Reuters

The Venerable Xuecheng, abbot of the Longquan Monastery in Beijing and China’s highest ranking Buddhist monk, has been accused by several nuns of sexual misconduct in the latest sign of the #MeToo women’s rights movement picking up pace in China.

The allegations against Shi Xuecheng, who is also head of the Buddhist Association of China and a member of the ruling Communist Party’s advisory body, were detailed in a 95-page document submitted in July to Chinese authorities.

Shi Xuecheng (51) has denied the allegations and said they were based on “fabricated information” and “distorted facts”. Buddhist monks are required to take a vow of celibacy.

The abbot posted a statement on Weibo, the Chinese equivalent of Twitter, denying the charges.

The accusations came from two male monks at the temple, who said the leader had sexually harassed and assaulted at least six nuns.

One of the victims reportedly filed a police report in June, the document filed by Shi Xianqi and Shi Xianjia alleged.

Monks in China are referred to by the title “Shi”.

The country’s religious affairs administration said it would investigate the claims and described it as a matter of “high importance”.

The document included screenshots of explicit messages alleged to have been sent by Xuecheng, including promises to “purify” the nuns through physical contact, demanding obedience and sexual favours, and insisting that sex was part of religious doctrine.

Sexual harassment allegations are relatively rare in China, a socially conservative country where the Communist Party doesn’t allow complaints if it feels they could undermine social stability.

The latest claims against Xuecheng were also published in the English edition of state-run tabloid Global Times.

However, in recent weeks, some prominent figures have been caught up in the country’s nascent #MeToo campaign, including journalist Zhang Wen, who was accused of sexual assault, and Lei Chuang, a charity operator who allegedly confessed to sexual assault in an online posting.

The allegations against the abbot went viral soon after they were posted, but were quickly suppressed by the authorities.

There are about 240 million Buddhists in China, even though the country is officially atheist. Most religious activities are controlled by the state-run Buddhist Association of China.

Longquan Monastery is one of the highest profile in the country.

Monks regularly come in for scrutiny in China. Abbot Shi Yongxin of the Shaolin Temple in Henan, famous for its kung-fu training, has been accused of embezzling income from the monastery’s formidable income from teaching martial arts, and also of having children and several wives.