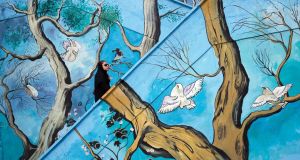 A woman walks past a wall painting in a street in Tehran on Tuesday. US president Donald Trump has said he would be willing to meet his Iranian counterpart, Hassan Rouhani, without preconditions. Photograph: Abedin Taherkenareh/EPA

Iran’s leaders cannot stand the thought of talking to the United States and say its president, Donald Trump, cannot be trusted. But Jamshid Moniri, a 45-year-old building contractor sweating under the Tehran summer sun, summed up what many ordinary Iranians think.

“Of course we should talk to Trump,” he said. “What is wrong with talks? “We’d be nuts not to talk to him.”

Trump, who withdrew the United States from the 2015 nuclear agreement with Iran in May despite Iran’s documented compliance, said on Monday he was ready to sit down with Iran’s leaders “without preconditions”.

“I’ll meet with anybody,” Trump said in Washington. “If they want to meet, I’ll meet. Anytime they want.”

On Tuesday, in Tehran, Trump’s open invitation seemed to be on everybody’s mind. Increasingly desperate, many say they would welcome any option that could ease Iran’s economic quagmire. The Iranian currency, the rial, has lost 80 per cent of its value during the past year – and nearly 20 per cent just in the past few days.

Foreign investors have left to avoid new US sanctions that take effect starting in less than a week. And almost every week low-level protests over prices or wages erupt somewhere in the country that have the potential to spread if the economic freefall worsens.

Moniri, the contractor, said he feared that what is considered bad now could get a lot worse. “So we should welcome talks,” he said. “Our leaders should welcome this opportunity.”

But if anything, Iran’s leaders seem paralysed by Trump’s offer. Direct talks with the United States go against their ideology. And in their minds, sitting down publicly with Trump, whom they have called particularly ignorant, capricious, arrogant and rude, would be an especially humiliating submission to imperialism and pressure.

When dealing with the United States over the past decades, Iranian leaders have often preferred to do it through secret talks, far away from ordinary Iranians, who are bombarded daily with organised anti-Americanism from their schoolbooks to state television.

“There can only be talks when Trump respects the signatures of the US administration in the nuclear agreement,” said Hossein Sheikholeslam, a senior adviser to Iran’s foreign minister, Mohammad Javad Zarif. “Trump should reverse the pullout from the nuclear deal, or else there will be no talks.”

Ayatollah Ali Khamenei, the supreme leader, who has enshrined anti-Americanism as a tenet of his legacy, made clear after Trump renounced the nuclear agreement that he would never talk with the US leader. “Trump will wither away, perish, and his body will decompose, but the Islamic Republic will still be thriving,” Khamenei proclaimed in a speech.

His review was reinforced on Tuesday, by the commander of the Islamic Revolutionary Guards Corps, the powerful paramilitary force that is intensely loyal to Khamenei. “Mr Trump! Iran is not North Korea to accept your offer for a meeting,” said the commander, Maj Gen Mohammad Ali Jafari, in remarks quoted by Reuters. “Even US presidents after you will not see that day.”

But many ordinary Iranians said they thought direct talks with Trump could be a pathway to solving Iran’s most pressing problems.

Sitting behind the wheel of a Peugeot 206, a French car produced in Iran, Ghader Safarzadeh explained that he thinks of himself as a patient man. His spotless car resembled his well-kept black mustache. Living off a dwindling pension, Safarzadeh works a couple of days a week as a taxi driver. He calculated that with the rising dollar, a cab ride that last year earned him the equivalent of $5 now made him $1.50 (€1.28).

“We can’t live like this for very long,” he said.

‘They are both bad’

Priced in rials, the costs of houses and cars have quickly doubled. At the Allaedin mobile phone bazaar, an iPhone X now costs four times more in rials than a year ago. People fear their wages in the Iranian currency could soon become practically worthless. The French school in Tehran is seeking teachers from abroad, but can offer a salary of only 20 million rials, or €390, a month.

There seemed no doubt in Safarzadeh’s mind that his leaders must talk to Trump. “What should be first is the economic welfare of the people,” he said. Anti-Americanism had held Iran back, and especially now, with an unpredictable leader in the United States, it was dangerous, Safarzadeh said. “Our leaders need to be wise and talk to this man,” he said. “Everybody else is doing it, why should we be different?”

Others said they had no idea who to trust anymore. “They are both bad, Trump and our leaders,” said Shahnaz Bagheri, a widow in her 60s. The past year had been tough for her. Her husband died after a long illness, Bagheri said, and she has been overtaken by economic worries. “Sanctions, devaluation – what should come of us?” she said.

For Bagheri, Trump and Iran’s ruling establishment are doing the same disservice. “They are bothering ordinary people,” she said. “They all speak as if they care for Iranians, but in reality all pressure is on us.”

Still, Bagheri expressed doubt that direct talks between Trump and President Hassan Rouhani of Iran would automatically help improve the lives of ordinary Iranians. “This Trump has many complexes and he is not interested in compromise, so talking to him might mean we end up losing even more,” Bagheri said. “I just want a better life for our people.”

The economic problems, combined with dozens of corruption cases that have exposed high-level greed, have made it difficult for Iran’s leaders to convince people that talking to the United States is a bad option, something supreme leader Khamenei highlighted in a speech two weeks ago.

“Of course Trump is manipulating our people by calling for talks,” said Nader Karimi Joni, a journalist and activist critical of Iran’s government. “He knows our leaders will decline. For ordinary people in Iran, it doesn’t matter whether Trump can be trusted, is crazy or even is serious about really negotiating. They just hear Trump wants to talk and our leaders don’t.”

Iran’s leadership has been trying to show the appearance of unity, and has taken on a defensive posture. Faced with the unpredictable Trump, both Rouhani and several commanders warned that they could close the Strait of Hormuz, a key passageway for global oil traffic, whenever they like.

But not everybody believes that would accomplish much. “Let’s face it,” said Reza Asghari, a 50-year old businessman. “We can’t really close off the strait without inviting US military action. In fact, we can’t even make preconditions for direct talks. Who are we to do that? We need jobs, not more tension.”

Rumours are swirling across Tehran that secret talks with the United States have already begun. On Friday the foreign minister of Oman, the Persian Gulf sultanate that hosted the secret meetings between Iranian and US officials that led to the nuclear talks, may visit Tehran. The minister, Yusuf bin Alawi bin Abdullah, was in Washington last week.

Some Iranians have expressed hope that Russia, which supports the nuclear agreement and has sought to strengthen strategic ties with Iran, will help cushion the effect of reimposed US sanctions. But Russia-Iran relations have their own tense history. The countries are rivals in oil production. Many Iranians mistrust Russia over what they view as its past failures to honour agreements on arms sales and energy.

“We are betting on the Russians for support, but they have betrayed us many times,” said Kheba Majidi, a 35-year old master’s student of Islamic theology, who was walking home from the green grounds of Tehran University. “Our officials should be wise before it’s too late and start negotiations publicly. Why not try the Americans?” – New York Times