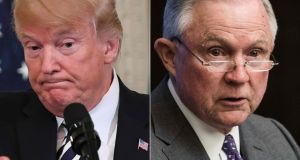 US president Donald Trump urged attorney general Jeff Sessions to halt the Mueller investigation into Russian interference in the 2016 presidential election on Wednesday, branding the inquiry a “total hoax”.

“This is a terrible situation and Attorney General Jeff Sessions should stop this Rigged Witch Hunt right now, before it continues to stain our country any further,” Mr Trump said on Twitter. The president also accused special counsel in the investigation Robert Mueller of being “totally conflicted”.

“Russian Collusion with the Trump Campaign, one of the most successful in history, is a TOTAL HOAX,” he tweeted. “The Democrats paid for the phony and discredited Dossier which was, along with Comey, McCabe, Strzok and his lover, the lovely Lisa Page, used to begin the Witch Hunt. Disgraceful!”

Mr Trump appeared to be referring to the warrant used by the FBI to investigate former Trump associates, which was based on a dossier compiled by former British spy Christopher Steele, parts of which have been discredited.

He was also referring to former FBI chief James Comey and the FBI agent Peter Strzok, who has been accused of sending anti-Trump text messages to a colleague, Lisa Page, with whom he was having an extramarital affair.

The president unleashed his Twitter tirade as his former campaign manager Paul Manafort appeared in court in Alexandria, Virginia, on the second day of his trial on bank and tax fraud charges.

..This is a terrible situation and Attorney General Jeff Sessions should stop this Rigged Witch Hunt right now, before it continues to stain our country any further. Bob Mueller is totally conflicted, and his 17 Angry Democrats that are doing his dirty work are a disgrace to USA!

“Why didn’t government tell me that he was under investigation. These old charges have nothing to do with Collusion – a Hoax!” he tweeted.

The president also compared Mr Manafort to the famous gangster Al Capone, implying that his former campaign chief was being treated worse than the Chicago crime boss.

“Looking back on history, who was treated worse, Alfonse Capone, legendary mob boss, killer and ‘Public Enemy Number One’, or Paul Manafort, political operative & Reagan/Dole darling, now serving solitary confinement – although convicted of nothing?” he said.

While this is not the first time the president has dismissed the Russia investigation, it is the first time he has explicitly urged the attorney general to stop the inquiry.

Technically, Mr Sessions recused himself from the Russia investigation last year, after it emerged that he had failed to fully disclose details of his meetings with Russian officials. But the request by Mr Trump for him to stop the investigation could be construed as obstruction of justice.

Following the tweet, several representatives of the president insisted that Mr Trump was offering not an order but an opinion in the tweet.

Mr Trump’s lawyer Rudy Giuliani defended the president by saying: “He expresses his opinion on Twitter.” Trump had used the word “should”, not “would”, Mr Giuliani said, noting that he hadn’t issued a presidential directive.

Mr Giuliani insisted that the president wanted the investigation to conclude and did not want to interfere in the inquiry. “He’s made it clear . . . but on the other hand he is a person with a First Amendment right to defend himself, to express his opinion. These kind of allegations can do damage to the country.”

Mr Giuliani reiterated the claim that he has perpetuated in recent days that collusion is not a crime. But he added that there had been no proof of collusion with Russia by the president.

“There is no evidence of collusion,” he said, in response to questions from reporters about Mr Trump.