Catalonia crisis: ‘Spain can go down a different road’ 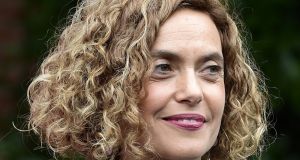 Spain’s Socialist Party has only been in power for two months, but Meritxell Batet, minister for territorial policy, believes there is reason for optimism when it comes to resolving the deep political crisis triggered by Catalonia’s recent independence drive.

“The situation is very difficult, it has got worse and worse and this crisis has deepened over the last few years,” Batet told The Irish Times. “But I believe that if there is political will and we can restore mutual respect, then there is still enough time and a political approach will stand a chance.”

On Wednesday, Batet and her government have an opportunity to deliver on such sentiment, when a Spanish-Catalan bilateral working group will resume its activities after a seven-year hiatus, evidence of a willingness in Madrid to engage with the northeastern region’s secessionist administration.

Despite having less than one-quarter of seats in Spain’s congress, the new administration has made several bold gestures: welcoming migrants who were adrift in the Mediterranean and had been shunned by Italy; appointing a cabinet dominated by women, and offering to engage in dialogue with the pro-independence regional government of Catalonia.

As a Catalan herself, Batet says she watched in dismay as the impasse between Madrid and the region steadily mounted before a full-blown crisis erupted with last October’s outlawed Catalan independence referendum.

Following that vote, the Catalan parliament issued a unilateral declaration of independence. The Spanish government subsequently introduced direct rule, which was only lifted in May.

Several Catalan independence leaders are currently in jail awaiting trial and former regional president Carles Puigdemont is one of a number of politicians who fled the country to live in exile.

“It’s been a painful experience for thousands of Catalans, it’s been heartbreaking,” says Batet, a Barcelona native who says the situation has affected every level of Catalan society. “We have lived through this confrontation, whether it be within families, between friends, in the workplace. There’s less freedom to talk with people about certain subjects. If you want to keep certain friendships you know you have to avoid the subject.”

She adds: “I never used to have any problems at all, I could take public transport. But since October of last year, on a few occasions, I’ve had people shouting at me, saying things like, ‘How dare you come to Catalonia’.”

During much of this political crisis, the Socialist Party has found itself in a difficult position. Its opposition to Catalan independence and the right to self-determination was clear (it voted in favour of the implementation of direct rule), but as the political landscape became increasingly polarised, between the separatism of Puigdemont and his followers on one hand and the right-of-centre unionism of Rajoy’s PP and Ciudadanos on the other, the Socialists’ relatively moderate voice was drowned out.

But now, as the party of government, the Socialists are determined to emphasise the difference between their stance on the territorial issue and that of the Rajoy administration, which took a rigidly legalistic approach to Catalonia.

“We believe you cannot simply impose something,” Batet says. “All you can do is offer a vision, an attractive common vision that offers hope and excitement, which is precisely what the government of the Popular Party did not do.”

As part of that more dialogue-based approach, prime minister Sánchez has already met with the new, secessionist, Catalan president Quim Torra, promising to consider many of his demands. Such a meeting had not taken place between the Catalan and Spanish leaders since January of 2017. Today’s bilateral working group is another signal of a change in Spanish government policy.

But such moves have drawn criticism from the political right.

“It’s incredible that Sánchez makes such an effort to keep the separatists happy and to be more friendly with those who want to break with Spain than with those who defend its unity,” Inés Arrimadas, leader in Catalonia of Ciudadanos, said recently.

Ciudadanos and the PP have accused Sánchez of being in debt to Catalan pro-independence parties because they voted in favour of the parliamentary no-confidence motion which made him prime minister.

Batet is adamant that is not the case. “There is no price to pay and there was not any negotiation, either with pro-independence parties or any other political party,” she says of the confidence motion. It was corruption in the PP, she insists, which gathered the votes needed to oust Rajoy, rather than any other factor.

Yet despite the apparent relaxing of tensions in recent weeks between Madrid and Catalonia, the Spanish government flatly rules out any chance of agreeing to the independence movement’s most constant demand: a negotiated, Scotland-style referendum on secession. Batet justifies this stance on the grounds that not only is such a vote impossible within the constitution, but it would also be highly divisive, as last October’s outlawed referendum showed.

However, Batet acknowledges that the region’s current autonomy statute is not the one Catalans voted on in a referendum in 2006, because parts of it were subsequently struck down following a legal appeal by the PP.

“That is not a positive situation, it requires an effort by public institutions to resolve this anomaly,” she says. “I don’t know if this is the moment to reform the Catalan statute of autonomy or to reform the constitution – the Socialist Party has been calling for such a reform since 2013 – but we know that this requires an extremely broad consensus between the different political parties.”

The government believes that if and when Catalonia’s political forces can reach an agreement on the region’s relationship with Madrid, its people could then vote on such an accord via referendum.

But she is quick to add that this would be a long-term solution and there are other more pressing concerns to be resolved.

“Right now we are in a phase prior to that,” she says. “I think first we need to restore respect, loyalty and the generation of mutual trust.”

Despite such hopes of restoring trust and eventually reaching a consensus, Spain’s overall political situation suggests that, if anything, polarisation could be increasing again.

The new leader of the PP, Pablo Casado, seems intent on leading the party further to the right, and he has said he will not engage in any dialogue with secessionists.

Meanwhile, Puigdemont has increased his control of the Catalan Democratic Party (PDeCAT), which seems to be appealing to more radical factions of its electoral base. Puigdemont recently warned the Spanish prime minister that “his grace period has finished”.

Despite all this and the fragility of the new Spanish government, Batet remains determined.

“All those pro-independence Catalan leaders who think it’s good to have an enemy [in Madrid] who galvanises their hostile electorate will think it’s bad news to have a Socialist government,” she says.

“But those who think from a point of view of responsibility and love for their homeland and their people, I suppose they will be happy that there has been a change and that Spain can go down a different road to the one it was on.”