Observers give Kenya vote thumbs up amid pockets of protests 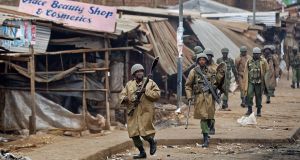 Riot police chase after protesters during clashes in the Kawangware slum of Nairobi on Thursday, in the wake of Kenya’s presidential election. Photograph: Ben Curtis/AP 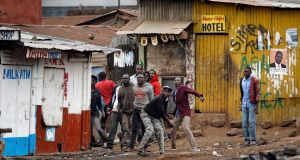 Protesters throw rocks at riot police during clashes in the Kawangware slum of Nairobi on Thursday, in the wake of Kenya’s presidential election. Photograph: Ben Curtis/AP

International observers on Thursday praised the handling of Kenya’s presidential election, with the European Union mission saying it had seen no sign of manipulation despite opposition complaints and scattered protests.

Police fired live rounds and tear gas as they clashed with opposition supporters in one Nairobi neighbourhood but most of the capital and the rest of the country were calm after four people were killed in violence on Wednesday.

President Uhuru Kenyatta has taken a commanding lead but his rival, veteran opposition leader Raila Odinga, has rejected provisional electronic results, saying figures released so far are “fictitious” and that election systems have been hacked.

As they wait for final results to be tallied and confirmed, many Kenyans are nervous of a repeat of the clashes that killed about 1,200 people after a bitterly contested 2007 election.

In its first assessment of Tuesday’s poll, the European Union’s election observer mission said it had seen no signs of “centralised or localised manipulation” of the voting process.

Marietje Schaake, head of the mission, said the EU would provide an analysis of the tallying process in a later report.

Provisional results released by the election commission showed Mr Kenyatta had won 54.3 per cent of votes, ahead of Mr Odinga on 44.8 per cent – a lead of 1.4 million votes with 97 per cent of polling stations having reported.

Former US secretary of state John Kerry, heading the Carter Center observer mission, said the election system, which is ultimately based on the original paper ballots cast, remained solid and all sides should wait for electronic tallies to be double-checked against hard copies.

“The process that was put in place is proving its value thus far,” Mr Kerry said. “Kenya has made a remarkable statement to Africa and the world about its democracy and the character of that democracy. Don’t let anybody besmirch that.”

Kenya’s election commission said it hoped to have all results centralised by midday on Friday and would announce a winner soon after that. It confirmed there had been an attempt to hack into its system but said it had failed.

Thabo Mbeki, the former South African president, who is in charge of the African Union observer mission, praised the poll so far. “It would be very regrettable if anything emerges afterwards that sought to corrupt the outcome, to spoil that outcome,” he said.

Reuters TV footage showed police firing live rounds as they clashed with youths throwing stones in Kawangware slum in Nairobi. One injured or dead person was rushed from the scene in a sack.

Angry protests had erupted on Wednesday in opposition strongholds in Nairobi and the western city of Kisumu, with demonstrators burning tyres in the streets.

Police shot dead one protester in Nairobi. One person was killed by a machete-wielding gang that attacked a tally centre in coastal Tana River county, and police shot dead two of the assailants.

On Thursday morning, some market stalls and shops were open in Kisumu and more vehicles were on the street than a day earlier.

A group of workers sitting in the shade said they were eager for daily life to return. “We don’t want to fight,” said driver Evans Omondi (28), wearing a polo shirt and jeans. “We want to go back to work.”

The men said they were worried by Mr Odinga’s allegations but that they could not afford the consequences of violence in their city, which saw some of the worst clashes a decade ago.

Mr Kenyatta, a 55-year-old businessman seeking a second five-year term, held a lead of about 10 per cent from the start of Tuesday’s counting, the culmination of a hard-fought contest between the heads of Kenya’s two political dynasties.

Mr Odinga contested and lost Kenya’s last two elections, which he also said were rigged. He has urged his supporters to remain calm but said: “I don’t control the people.”

He posted 50 pages of computer logs online to support his hacking claims, but they were inconclusive, according to Matt Bernhard, who studies computer security in election systems at the University of Michigan.

In 2007, tallying was halted and the incumbent president declared the winner, triggering an outcry from Mr Odinga’s camp and waves of ethnic violence that led to International Criminal Court charges against Mr Kenyatta and his now-deputy, William Ruto.

The cases against them collapsed as witnesses died or disappeared.