Jeremy Corbyn condemns ‘violence by all sides’ in Venezuelan conflict 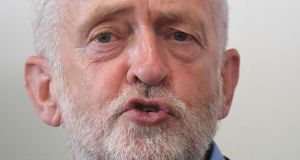 Jeremy Corbyn has condemned the “violence done by all sides” in the Venezuela conflict but stopped short of criticising its socialist president, Nicolas Maduro.

The British Labour Party leader called for “dialogue and a process” to improve the situation, stressing the importance of recognising the government’s “effective and serious attempts” to reduce poverty, improve literacy and the lives of the poor.

Some Labour MPs have urged Mr Corbyn to personally condemn Mr Maduro, whose regime is accused of locking up opposition leaders and violating human rights. The shadow minister Chris Williamson also blamed the US for “aiding and abetting” opposition protesters trying to topple the socialist government.

Speaking after an event in Crawley, West Sussex, Mr Corbyn did not single out Mr Maduro for criticism. “I’m very sad at the lives that have been lost in Venezuela,” he sad. “The people who have died – either those on the streets or security forces that have been attacked by people on the street – all of those lives are terrible for the loss of them,” he said.

“There has to be a dialogue and a process that respects the independence of the judiciary and respects the human rights of all.”

Mr Corbyn was a long-time admirer of Venezuela under its late socialist leader Hugo Chavez, whom he described in 2013 as “an inspiration to all of us fighting back against austerity and neoliberal economics in Europe”.

The Labour leader had also previously given his backing to Mr Maduro, who succeeded Chavez. In 2014, he called to congratulate the new president live on a Venezuelan television channel; Mr Maduro introduced Mr Corbyn, then a backbencher, as a “friend of Venezuela”.

Asked whether he condemned Mr Maduro’s actions, Mr Corbyn said: “What I condemn is the violence that’s been done by any side, by all sides, in all this. Violence is not going to solve the issue”.

Pressed on whether he regretted supporting Mr Maduro when he was elected, he said: “I gave the support of many people around the world for the principle of a government that was dedicated towards reducing inequality and improving the life chances of the poorest people.”

He said he supported France’s call for peace talks, and said it “should be regionally based to improve the situation there”.

Political rivals seized on Mr Corbyn’s statement to criticise the Labour leader. “Despite the destitution and the depravity of Maduro’s government, Corbyn fails to criticise Maduro,” said the international development secretary, Priti Patel. “What will it take for Corbyn to finally urge Maduro to stop the violence, the human rights abuses, the poverty and the killings?”

Earlier, Theresa May’s official spokesman called on Venezuela’s government to release political prisoners and show respect for democracy and human rights, after weeks of violence in the country.

No 10 said Britain had condemned the Maduro government for forcing through a constituent assembly that clearly did not represent the will of the Venezuelan people.

“It is a tragedy that so many people have lost their lives in protests in Venezuela. We’re clear that urgent action must be taken to stop the situation getting worse,” the prime minister’s spokesman said. “The UK has repeatedly called on the Maduro government to work with the opposition, release political prisoners and show respect for democracy and human rights.”

The EU also stepped up its criticism of Maduro’s government on Monday. Federica Mogherini, the EU foreign policy chief, said the assembly’s actions, and the removal of Luisa Ortega Diaz as attorney general, had “further weakened the prospects for a peaceful return to the democratic order”.